The Art of Ann Purcell 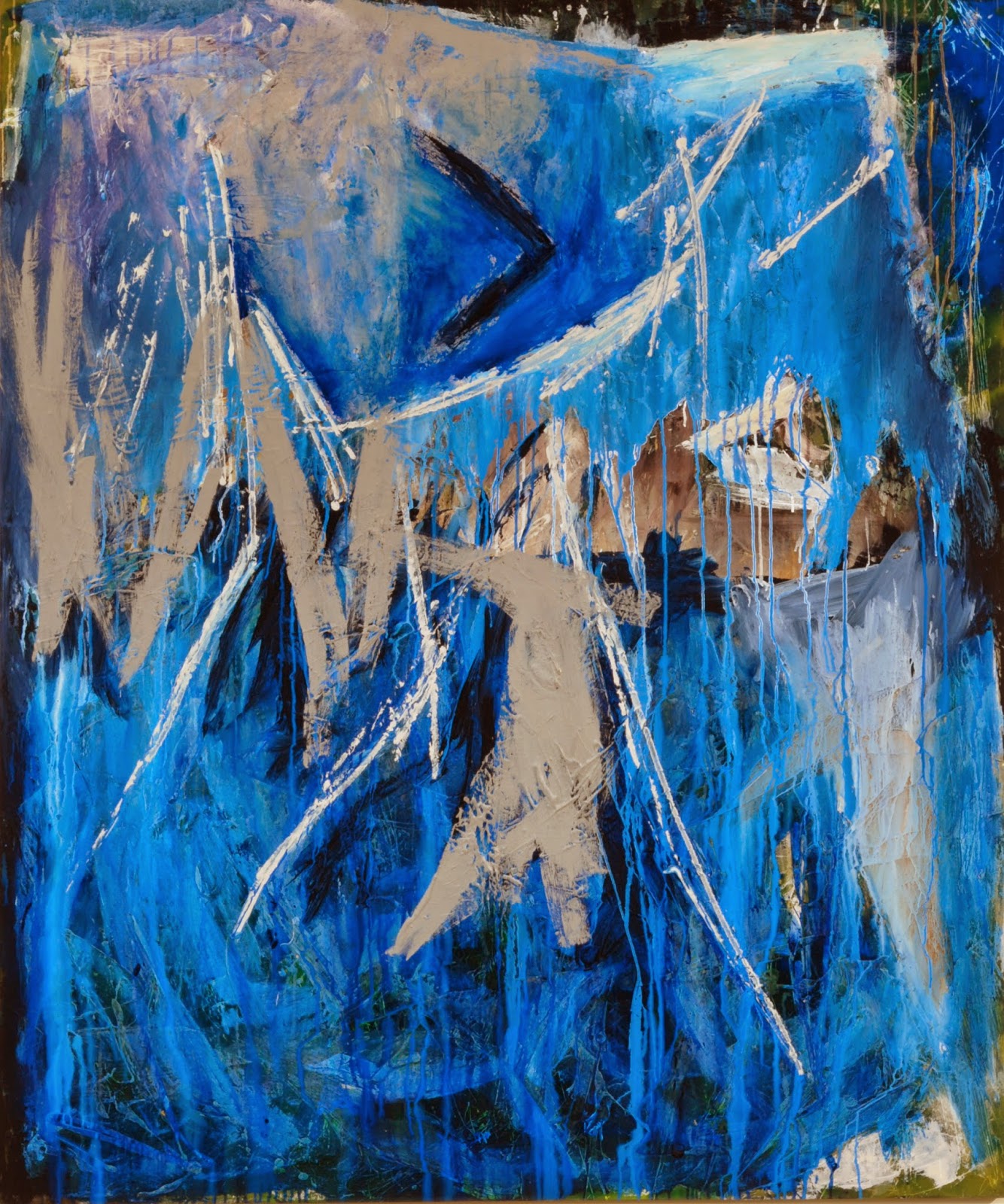 
Ann Purcell is a nationally recognized and highly respected artist working in Redhook, Brooklyn. Her paintings are represented in over 17 major museums in the United States - including The National Gallery of Art, the Corcoran Gallery of Art, The Phillips Collection, The National Museum of Women in the Arts in Washington, D.C., Santa Barbara Museum, The Baltimore Museum, Mint Museum in Charlotte, North Carolina, and the New Orleans Museum. She has the respect and support of many prominent art museum directors and contemporary curators.

She has had numerous solos and group exhibitions at prestigious galleries around the country including: Tibor de Nagy Gallery , New York City; Bernard Jacobson Gallery in New York and London; Dart Gallery, Chicago; Hokin Gallery in Chicago, Miami and Palm Beach; and Osuna Gallery in Washington, D.C., Bethesda, Md. and Miami; and Misrachi Gallery in Mexico City, and most recently, Berry Campbell in New York City.

Her works are in both prominent private and corporate collections including: ATT, Vesti Industries in Cambridge, the "Art in the Embassies Program" of the U.S. State Department; Pepsico Collection, New York; Philadelphia Life Insurance; Capitol Holding Corporation, Louisville; Continental Bank of Chicago; international law offices of Mayer, Brown and Platt, Washington, D.C., Chicago, New York, Tokyo; and Debevoise and Plimpton, Washington, D.C.; the Embassy of Italy, and numerous other collections.

Purcell taught painting, drawing, and art history for many years at The Corcoran College of Art and Design, and The Smithsonian Institution in Washington, D.C., and Parsons School of Art and Design in New York. She has frequently been a guest lecturer and artist-in-residence at various universities and a recipient of a Pollock-Krasner Foundation Grant in Painting and the Lester Hereward Cooke Foundation Grant for Mid-Career Achievement in Painting (from The National Gallery of Art).

Ann Purcell: Paintings from the 1970's is on view at Berry Campbell through tomorrow, February 7. 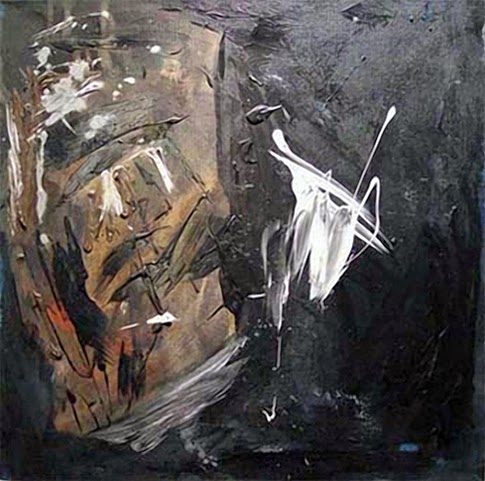 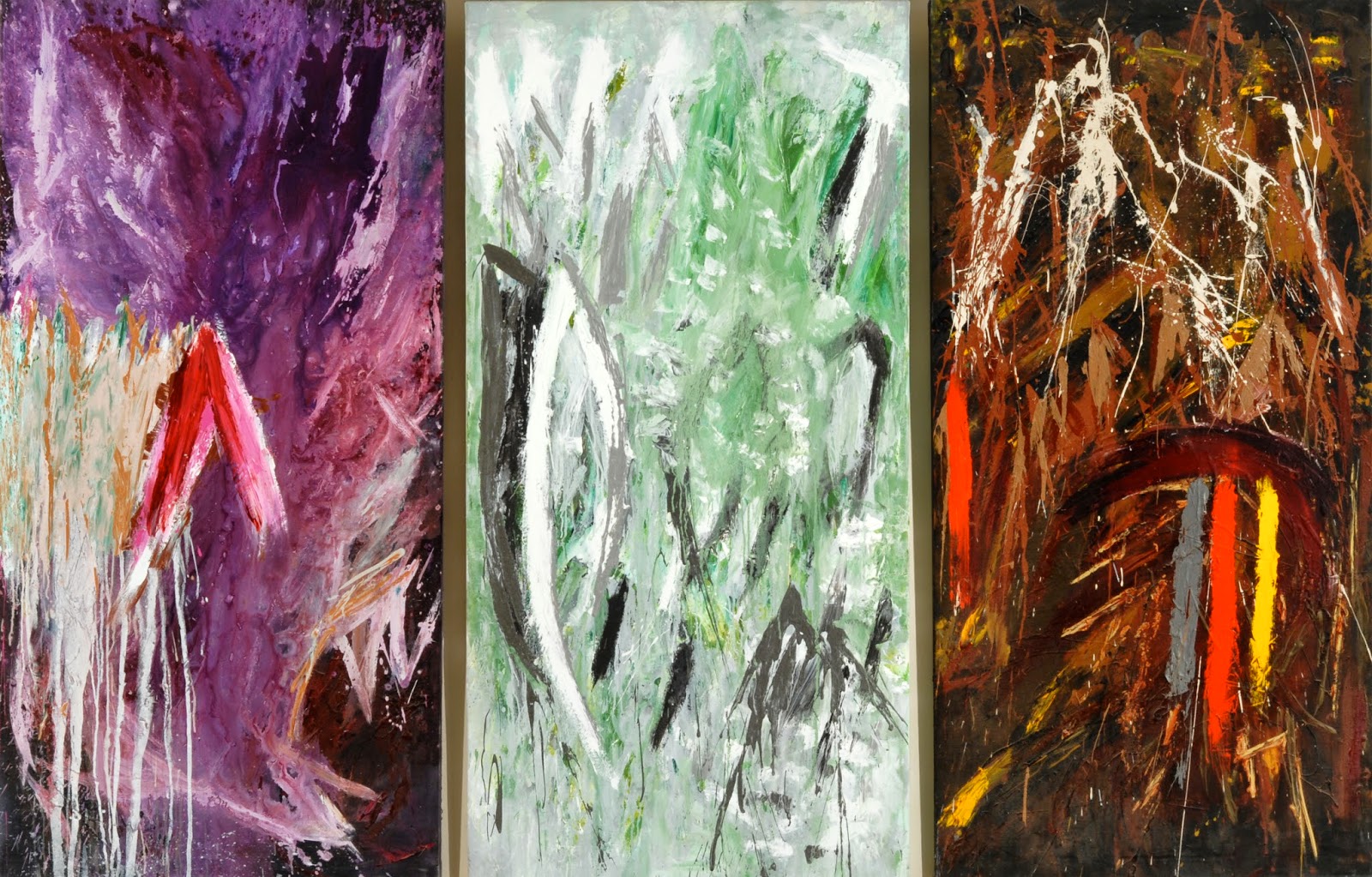 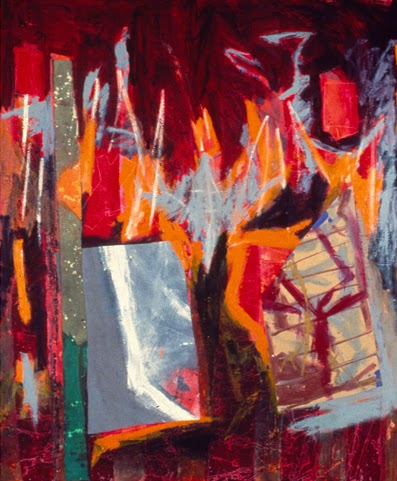 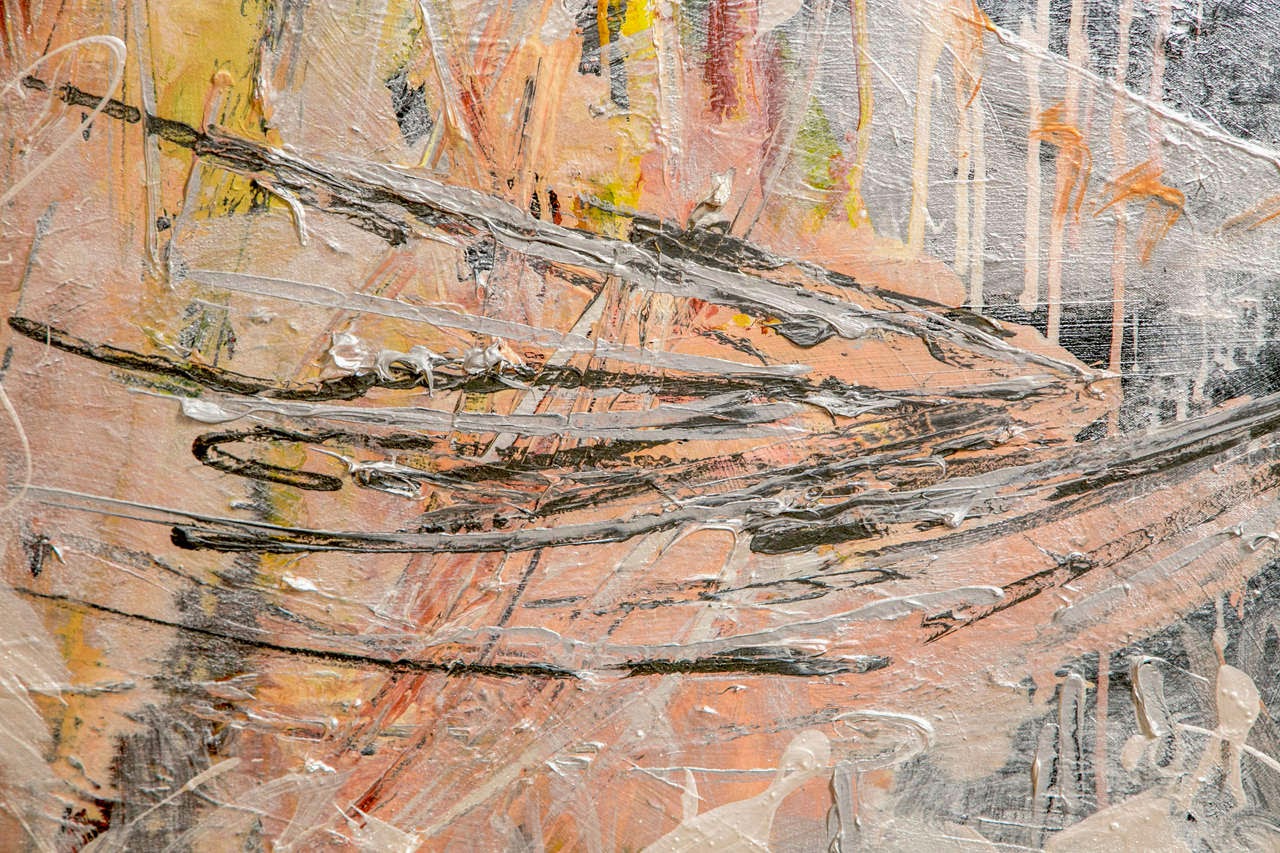 My painting has always been about working within tensions of paradox, ambiguity, duality and contradictions -- and uniting those polarities.  It is this same content within my "Kali Poem Books".

This time and sequence is manipulated by accordion-folded style books, which thus, break the painting into a mixture of rhythms, intervals, sequence, and non-sequence, flow and staccato, repetition, divisive, whole -- all elements very much related to music and dance.  Also, there is the actual time involved in literally turning the pages.  This real time is countered by implied time by juxtaposing various moods and abstractions.  The intimacy of this format, and the direct involvement of the viewer, is another aspect that greatly interests me.  I have also transferred what I am exploring in these books into my paintings in the form of diptychs, triptychs, quadryptychs, screens, and serialized abstractions.
-Written in October 1994 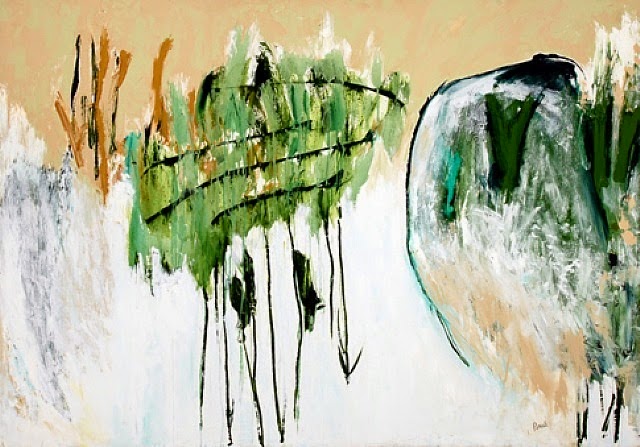 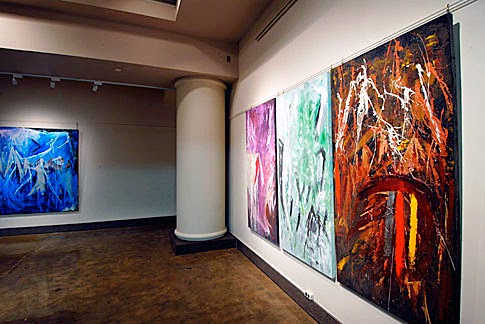 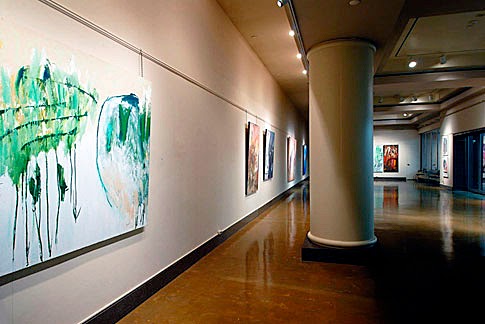 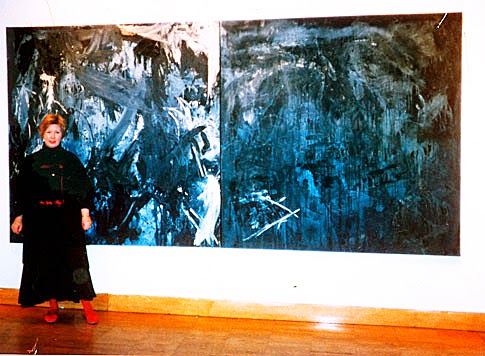 Purcell stands before, Vanishing Time Diptych, an early painting from the Kali Poem Series at Cooper Union School of Art. The exhibit, Primal Forces, was curated by the Studio Museum of  Harlem, 1990.


Statement on Diptychs and Triptychs:

The extensive "Kali Poem Series" (over 93) developed out of other works over a 20-year period.  All of these paintings incorporate ideas of duality, polarity, and complex paradoxes in greater spatial complexities of deep atmospheric space.
For l5 years this space developed through the use of collaged/pieced paintings.  Later this work evolved into books which are folded, Oriental-style continuous pages, related to elements of time and sequence in abstract painting.  This abstract time and sequence is unlike narrative elements in representational, serialized painting.  It is the time and sequence that exists in music and dance.  Since the books, I have been developing many diptychs, and triptychs of time and sequence to this end.  I am pleased that one of these books is in the permanent collection of The National Gallery of Art in Washington, D.C., and my painted books were included in exhibitions in the National Museum of Women in the Arts in Washington, D.C.

I also wanted to broaden abstract painting from a rigid and static state.  I wanted to create a dialogue between the individual paintings, a dialogue sometimes understandable and harmonious, and at other times jarring, chaotic, confusing:  a new kind of communication, a new way of seeing.  They are not arbitrary.
I continue to explore what I think is a very innovative and important, unexplored dimension in painting.
- Written in 2002 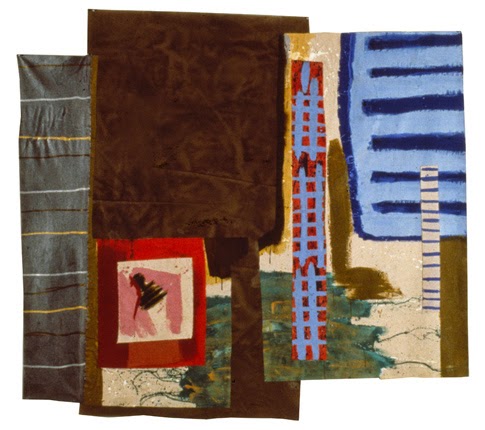 I agree with Matisse who said. “He who wants to dedicate himself to painting should start by cutting out his tongue.” I do not believe that what I think and what I feel in my painting can be translated fully from paint to words. So I’ll think of this as a painting and just leap in. I like painters who like paint. I love to paint.
My painting is working within tensions of paradox, ambiguity, duality and contradiction. It is not on one side or the other, it is those polarities united. This is the totality and the fullness. The meaning cannot be expressed in words alone: it is a feeling, a sense, an experience, a joy, an idea.
Process is important – the act of painting itself. Thinking but not thinking, loose and free but controlled. Actively moving. Dance was very important to me when I was growing up. And now the relationship of music and dance is present in the gesture of painting. Creating a dialogue between the paintings, sometimes chaotic, sometimes flowing. It is not static. It cannot be easily read.


Most importantly the painting must be alive-

The cactus is one of the roughest and rawest plants and it grows the most beautifully gentle, delicate flower. “Latwahn” is an Indian word that means both love and pain. The meanings cannot be separated. 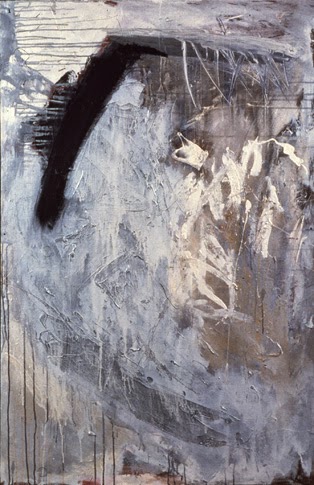 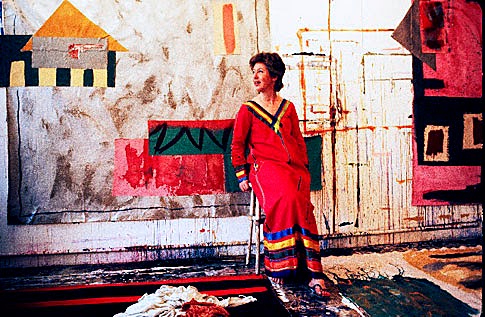 The painter in her Chelsea studio in 1982 surrounded by work from her Playground Series Paintings. 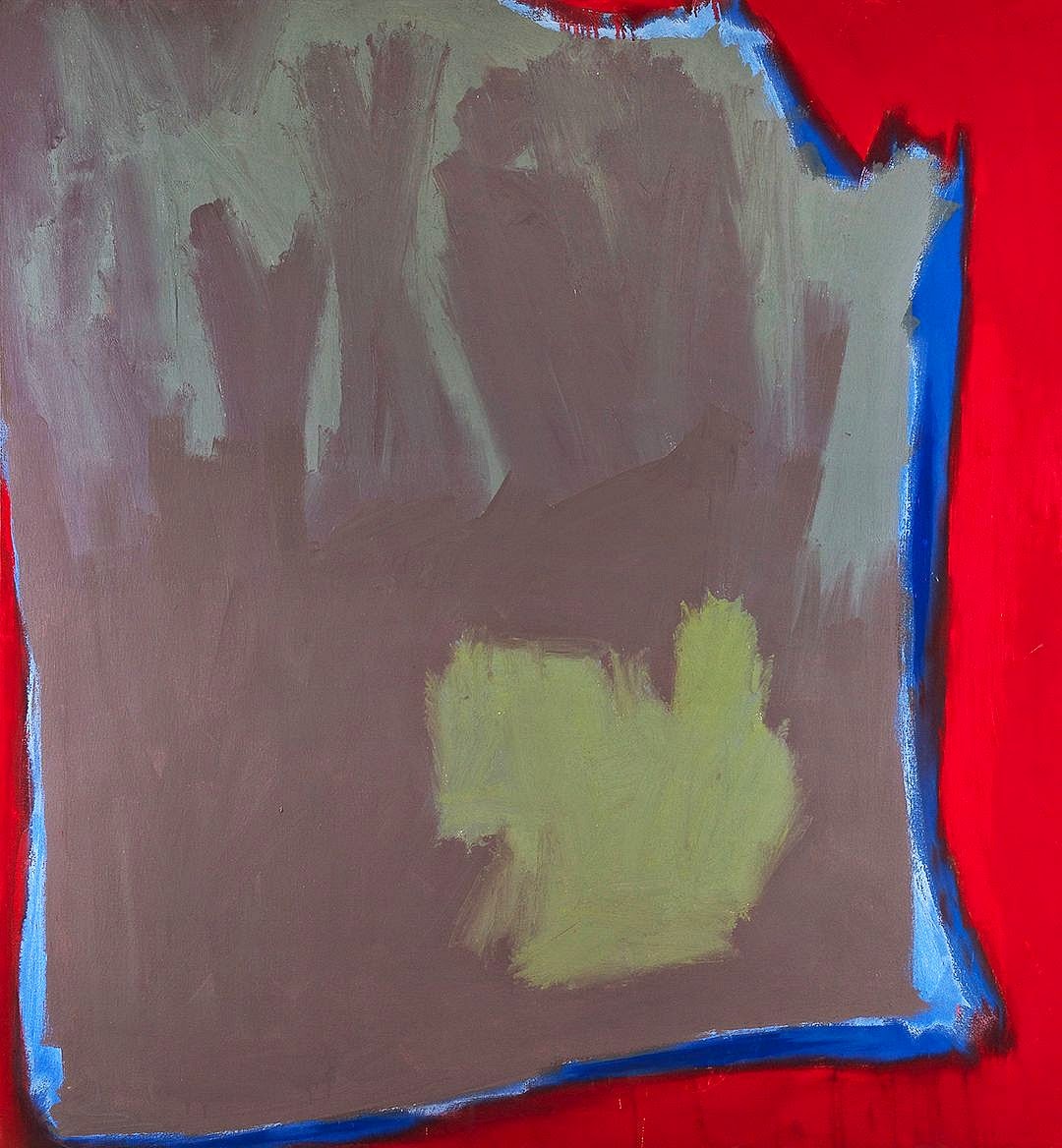 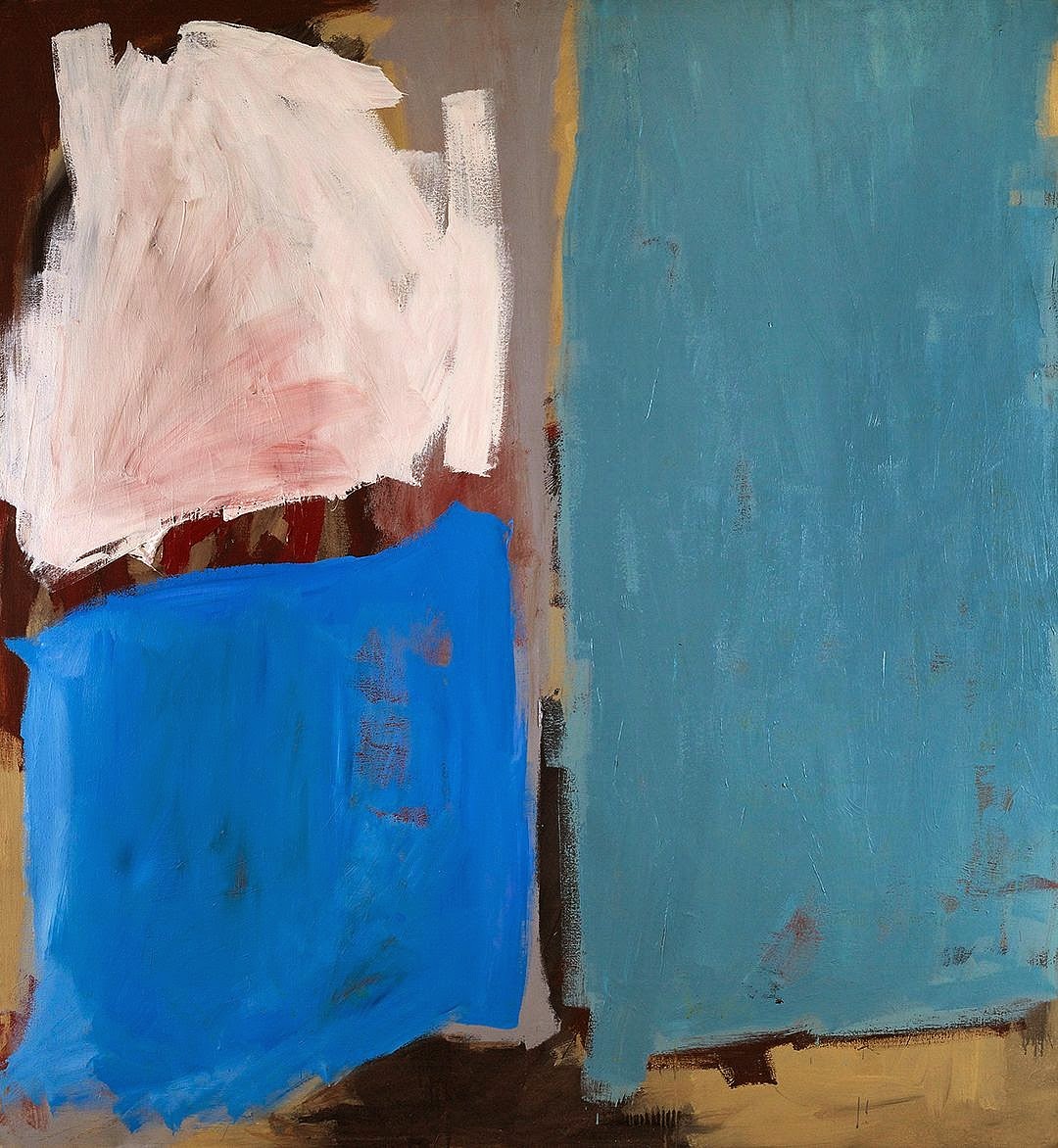 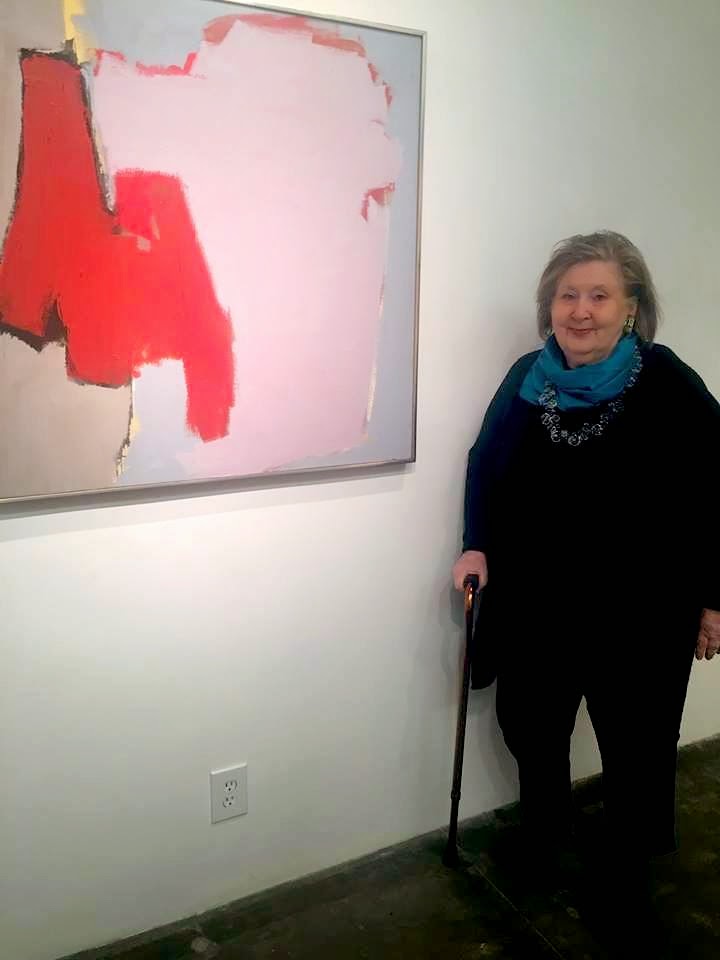 Ann Purcell attending the opening of her solo exhibit, Paintings from the 1970s, at Berry Campbell in New York City, in January. 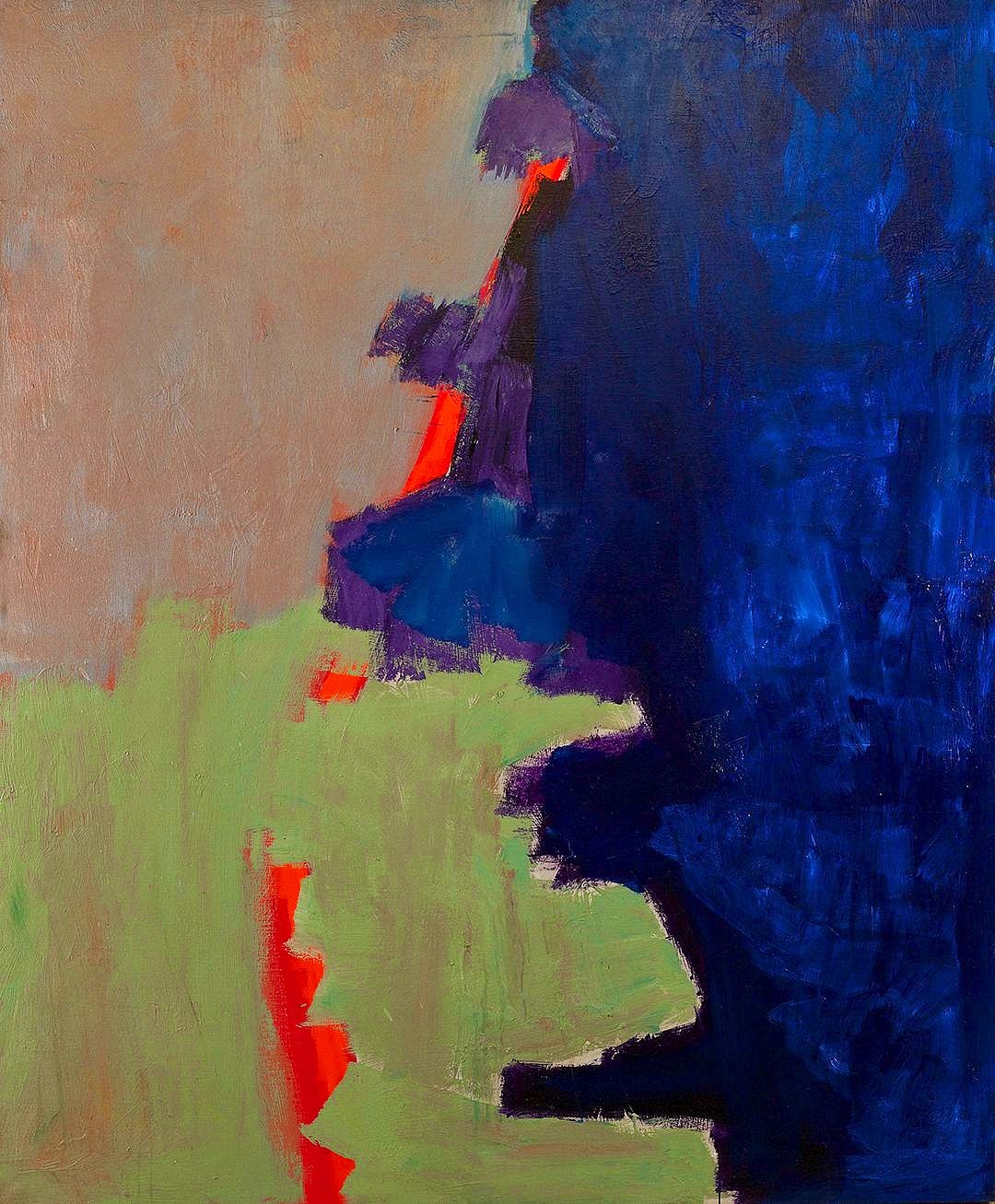 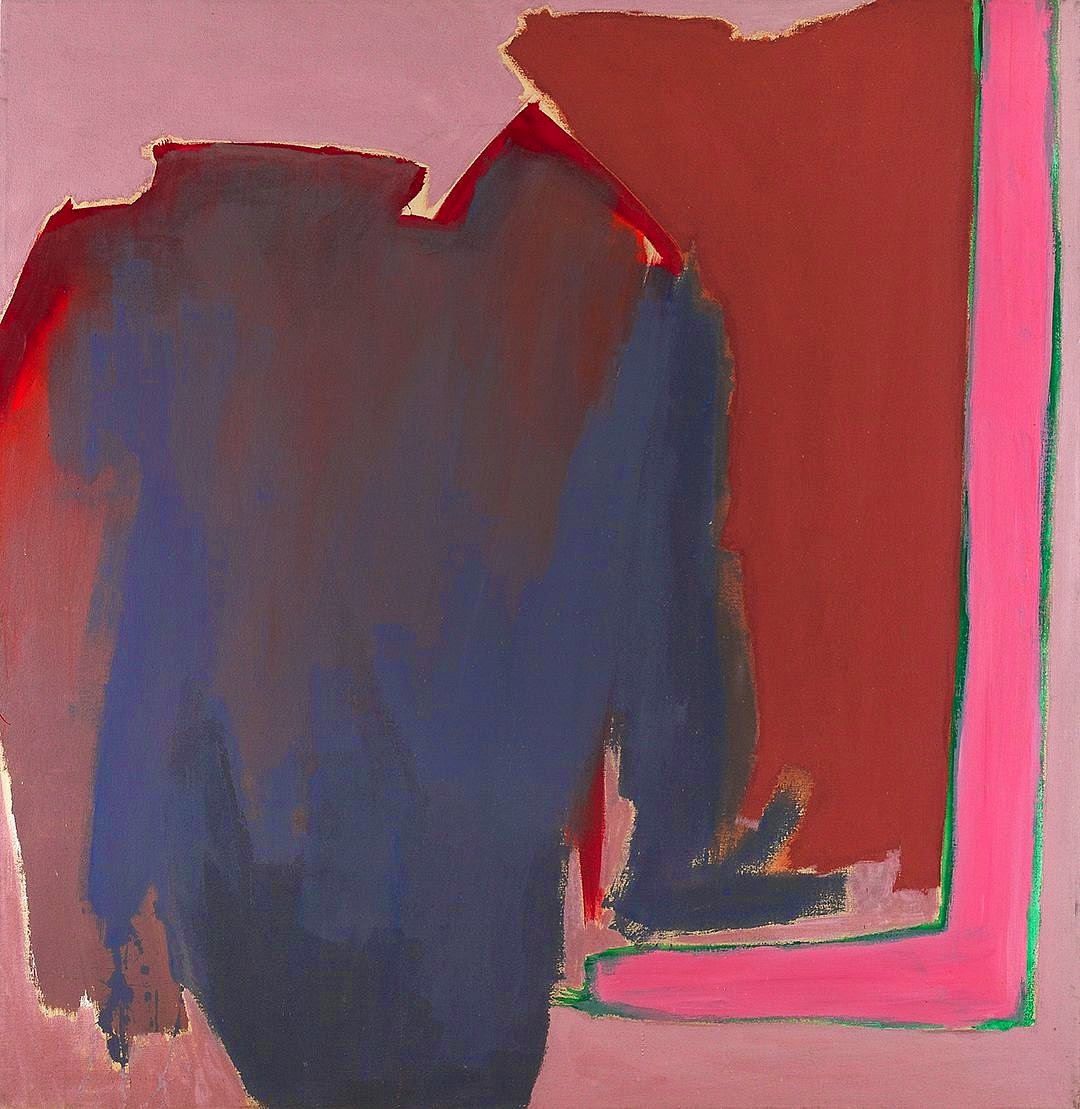 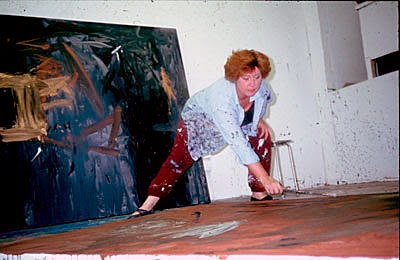 An athletic way of painting- Purcell seriously studied ballet and dance for seventeen years and continues to paint to eclectic music. Here she is seen working on a piece from the 2 Kali Poem Series, 1989.

Ann Purcell: Paintings from the 1970's is on view through tomorrow February 7.


*All images © the artist and Berry Campbell.

'I like painters who like paint. I love to paint'
great quote, universal with artists I guess, but resonated loudly with me anyway
t.hanksfor this, had never heard of her, so grateful to you for introduction to such great paintings and artists