From the Press Release:
Foxy Production is pleased to present Waterwood, Gabriel Hartley’s latest solo exhibition at the gallery. Hartley is known for his abstracted paintings that evoke figures and cityscapes. His new series of acrylic and ink paintings on wood suggests vistas of landforms and weather systems, and, at the same time, images from inner space, of the body or mind. The works play with the duality of representational painting: while it may simulate the world, it can also be appreciated as a confluence of forms, colors, and textures. The exhibition taps into the visceral pleasures of the opposing drives of human perception: to both sustain illusion and to deconstruct it.
Gabriel Hartley (London, UK, 1981) lives and works in London. He holds a BA in Fine Art from Chelsea College of Art and Design, London, and a Post Graduate Diploma in Fine Art from the Royal Academy Schools, London. 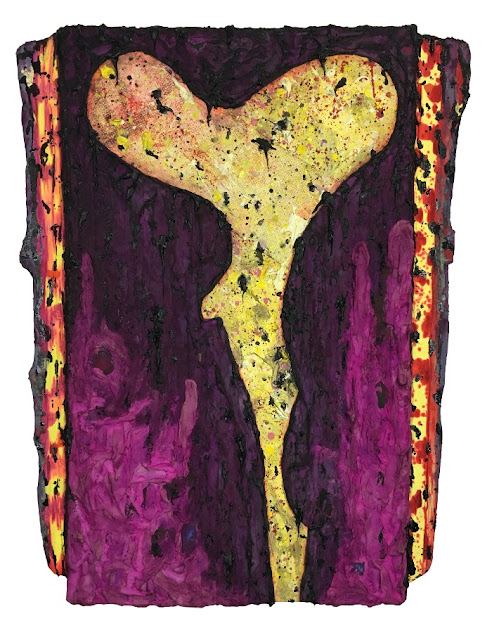 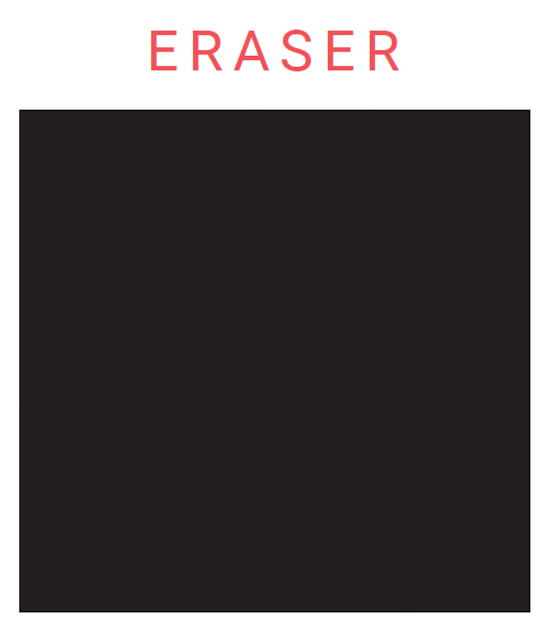 Eraser is a new Curating Contemporary quarterly published by painter and curator, Brian Edmonds. Curating Contempoary was begun in 2012 with the goal of connecting artists, curators, and likeminded people. Since its inception, curatingcontemporary.com has hosted over 50 shows and the work of hundreds of artists. 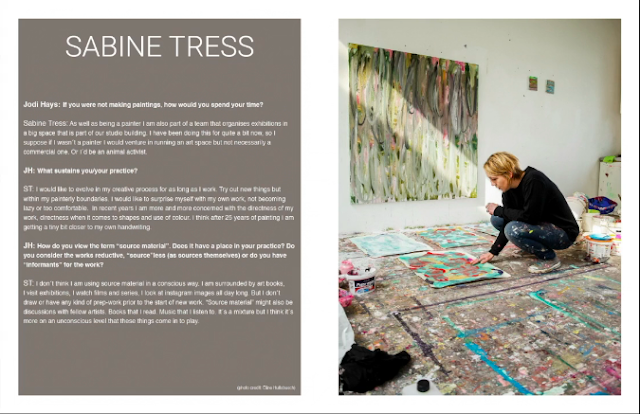 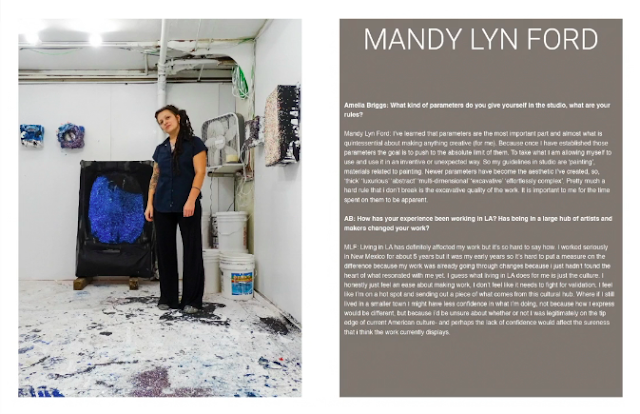 This Full Moon: Image and Text by Nehal Devi 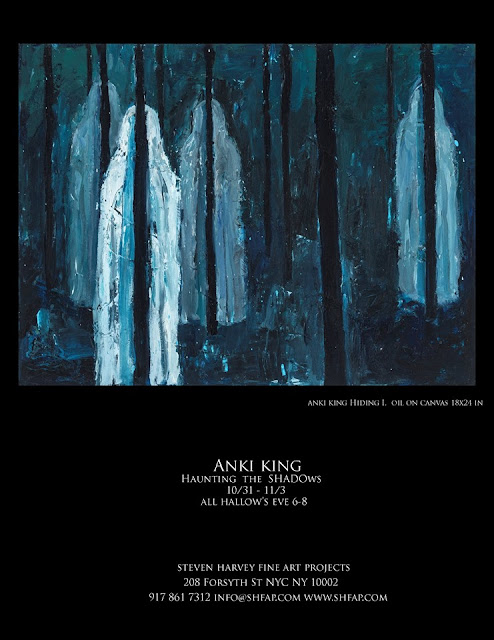 Anki King presents a gathering on All Hallows' Eve.

There have been some great chances to catch an in depth look at the work of Benjamin Pritchard.
The latest opportunity is on view through October 27th at SFA Projects in the form of the two person exhibition The Time Circle.
Pritchard and Benjamin La Rocco have long discussed the possibility of this exhibition that explores and reinforces the two's common concerns.

This Sunday on the final day of the exhibition SFA Projects will host an informal gathering and discussion on the ongoing dialogue between these two longtime friends. 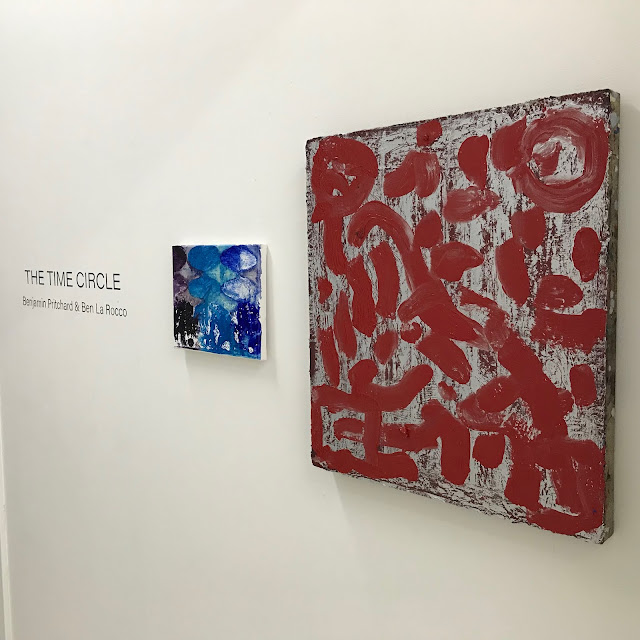 A Tapered Teardrop at Terrace 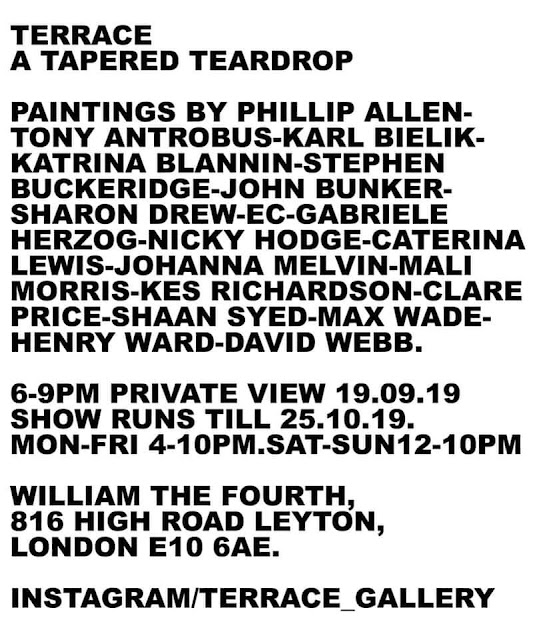 Common and Transcendent Experiences: The Art of Kamonchanok Phon-ngam

Kamonchanok Phon-ngam is a multi-disciplinary artist and an integral part of the art communities in Brooklyn and the Lower East Side in Manhattan.

Her art practice and the ideas that fuel it are wide ranging, deeply personal and frequently visionary.

Phon-ngam pushes the medium and methods of fabric and sewing far beyond their traditional associations with craft by infusing them with a contemporary personal narrative as well as shared experiences of life in New York City.

Often she uses indigenous materials as a foundation and backdrop to be embellished by the more traditional methods of drawing, collage and a painter's eye for color and composition.
The satisfying combination of the historic and the intimate transforms matter into a shared experience of the mundane and the discarnate.

Kamonchanok Phon-ngam was born in 1986 and is a Thai artist living in New York City. In 2013 she completed her MFA at King Mongkut's Institute of Technology Ladkrabang in Bangkok.

Her work has been presented at the National Art Museum of China and the Beppu Art Museum Oita in Japan. Phon-ngam has exhibited extensively in New York City since 2016; including a solo exhibition at Sugar Club and many group shows at venues such as the Roger Smith Hotel, TRANS-CEN-DER at Brooklyn Fireproof, the Friday Studio Gallery and SFA Projects.

Among the distorted society and reflection of humans in capitalism world, the advanced science and technology have been developed for our convenience and easy to access lives. We may recognize and sense that sometimes we blindly over consume and become unaware of the facts that really matter. Being greedy to have and greedy to be misled us in the illusion world. We have made happiness out of materialization, definition, experience and artificial thoughts which are caused by material wealth, reputation, compliment, position, responsibility, movies, food, gambling, lottery, human, etc. these things are imagination. These factors cause people to see the world and lives of themselves and others in the society differently and sometimes their behavior and reactions are more into just their own benefit. Because if we cannot consciously control and wisely consider when we want to be equal, desire to have and to be something, we will be deceived by appearance and finally lose humanity in the world where “sight” matters more than heart. The things that most attach benefits from human are “illusion”. Sometimes they affect how we see the world and devalue humanity in human beings. For example, in some society, each individual might be lost and lose themselves when we worry too much about being called an odd. Following the crowd because we’re afraid is the main reason that causes human in the crowd utterly change their behaviors. Many people go wild, they come bad, vandal or even cruel, just because they’re scared of others, especially those who are more powerful or higher position. They are not willing to take it or be called an odd. This fear can radically influence the society and national level (Normative Influences) since human are social animals, after all, the result of the decision goes to what majority agree.

Another example is the matter of speaking or communication is very important. In the globalization era, we can record video, speech and post on YouTube or various forms of social media and share immediately, we can also talk to people on the other side of the world by clicking a few buttons. Moreover, everyone in any career has to communicate, whether to customers, boss, subordinate and coworker.  And in everyday life, we always have to talk to family, close friend. So "Art of Speech" is extremely important in order to bring happiness and success in life. Buddha had given examples for us which are easy to understand.  The principle is that our thoughts are the comparison of our shadow that follows us everywhere even in the dark. Good thoughts lead to good life, in contrast bad thoughts lead to bad life.
Therefore, starting point of this series was created from the doubt of process of human mind. Individuality and identity are all different. The behaviors are expressed communicate from consciousness and subconscious, result in having positive and negative mentalities which might be caused by different genetics and discipline from parents. As a result, we look at the world differently have different beliefs, thoughts, memories and mindsets. There are thousands of emotions in our mind for instance love, greed, anger, passion, loneliness, sadness, boring, grumpy fear and etc., some of them can’t even be described in words. These emotions are expressed as our behaviors differently, sometimes we don’t express exactly how we feel or how we want to. Messages are the reflection of people in the society, relationship between people and limits of the society with the expression of speech, thoughts and actions which represent the person. Even the way people listen represents them. If you “judge” when you listen, the only thing you hear is the sound from identity within you. One Buddhist principle mentioned that “repeated thoughts become words, repeated words become actions, repeated actions become innate characters”.
So the point of not being under any kind of influence is “seeing through” or “being conscious”. When we’re conscious, we know who we are. Observing yourself is the basic thing that human should do, checking your consciousness, kindness, sympathy, wisdom, ability. Moreover if we learn more in the mind. We will be comprehend others more than ever. When we learn to work with our own minds, modulate and deeply find balance of life, it will change habits and behaviors. Then we can filter the real happiness by ourselves, for relationships and society, and make the world a better place.
-From the Artist's Statement

Forms in a State of Mine:

To reveal the unpleasant feeling of fears that occurs and is unconsciously stored in human minds. People have different fears, depending on the stimulated experiences that impacted their frightened perception. An unpleasant perception, for example, lead to feeling of fears and stored in humans’ mind. Some people fear animal, certain objects or darkness.  Fear is occurred from humans’ imagination and perception. Human create their own fear, and such fear control those peoples’ mind unlimitedly and unreasonably. People might get ready to do anything they could to avoid facing with whatever they are afraid of.

-From the Artist's Statement

***Photograph of the artist ©Ryan Teeramate.
Images of artwork are courtesy of the artist.
on September 21, 2019 No comments: 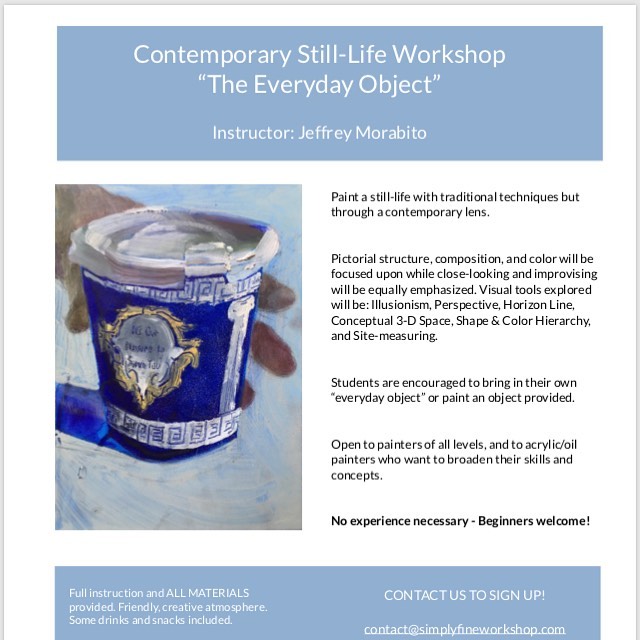 Jeffrey Morabito will be teaching a Still-Life Workshop: The Everyday Object

Paint a still-life with traditional techniques but through a contemporary lens. Pictorial structure, composition, and color will be focused upon while close-looking and improvising will be equally emphasized. Visual tools explored will be: Illusionism, Perspective, Horizon Line, Conceptual 3-D Space, Shape & Color Hierarchy, and Site-measuring. Students are encouraged to bring in their own “everyday object” or paint an object provided.
Open to painters of all levels, and to acrylic/oil painters who want to broaden their skills and concepts.
No experience necessary — Beginners welcome!
Full instruction and ALL MATERIALS provided. Friendly, creative atmosphere. Some drinks and snacks included.

About Jeffrey Morabito:
Born in Bronxville, half Hong Kong-ese and half Italian, Jeffrey Morabito spent his early years traveling between New York and Hong Kong. He returned to Asia in 2006, to apprentice with a calligraphy master in Seoul, South. Korea. He then spent six years in Beijing, beginning with a Red Gate Gallery Residency, in 2009, teaching at Capital Normal University. Morabito returned to New York in 2016 to pursue an MFA at the New York Studio School of Drawing, Painting, and Sculpture, while also founding JMN Artists, a curatorial collective, which has already produced three shows in New York.
Morabito has exhibited in “Art Beijing;” International Art Fair and Matthius Kupper Gallery, Beijing, China; N-Space and Jay Gallery Seoul, South Korea; Rosenfeld Gallery, New York; SFA Projects, New York
on August 12, 2019 No comments:

The exhibition ‘White on White’ explores the philosophical, poetic associations of the colour white through the work of Melbourne artists Anna Caione and Fiona Halse. Caione and Halse express the synergies and divergences in their approach to abstraction through the process of surface manipulation and gestural expression. Their shared preference for the colour white amalgamates their works yet each artist loads the neutrality of the hue with a diversity of personal meaning that gives rise to a range of intriguing interpretative possibilities.White is considered by some to be a non-colour, yet its transformational qualities continue to fascinate contemporary artists. White can be purely suggestive or a dominant force informing the intrinsic visual language within an artist’s work. The initiation of the single-coloured artwork termed the ‘Monochrome’ is a fairly recent occurrence of twentieth-century art, with practitioners such as Piero Manzoni, Robert Ryman, Mary Martin and Kazmir Malevich falling into the category of monochromatic painters. Curator Tanya Barson of the Tate’s Painting with White exhibition has noted that the decision for artists to restrict themselves to one colour can open up a rich and versatile area of investigation, with the use of white drawing attention to a variety of techniques, materials, textures, surfaces, structures and forms.The exhibition is a tribute to Kazimir Malevich and his Suprematist composition: White on White (1918). Whilst the Black Square (1915) is commonly believed to be the ‘first Suprematist painting’ (Lodder, C. 2018, p. 13)  and communicates Malevich’s aesthetic  theory  as the ‘the supremacy of pure feeling or perception in the pictorial arts’ ( MOMA, n.d.). Malevich’s contribution was significant to the development of non-objective and abstract art, which he believed could pave the way to spiritual freedom, a utopian world of pure form and a  ‘universal language that would free viewers from the material world.’ (Malevich, K, 1926). 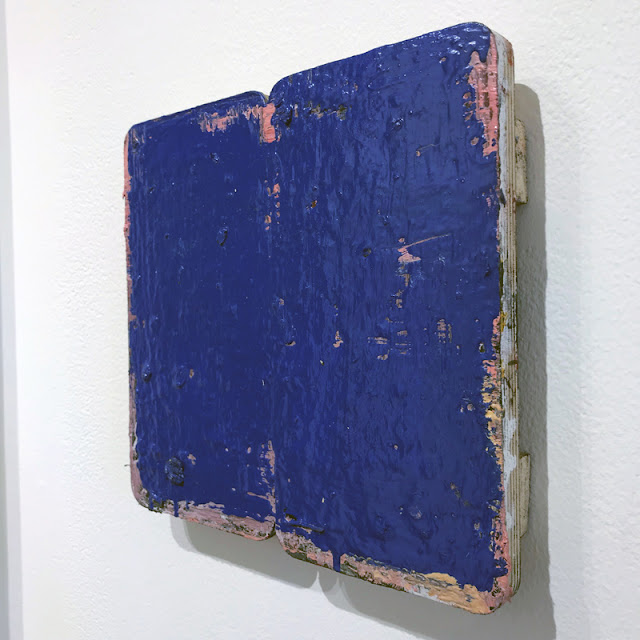 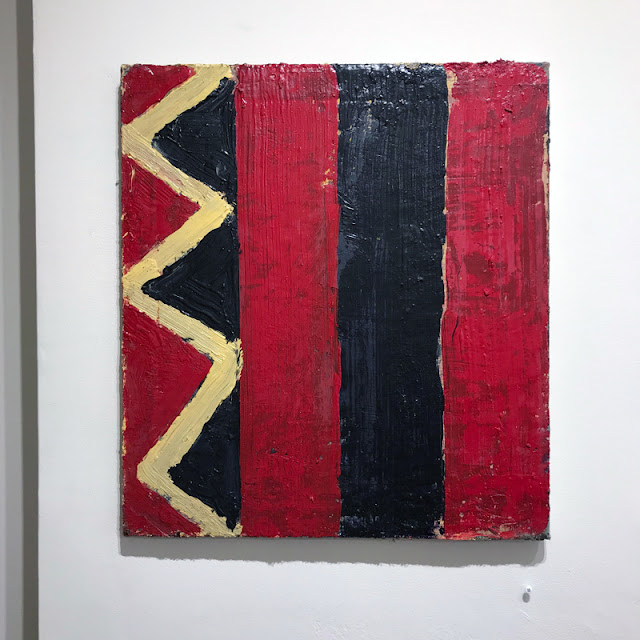 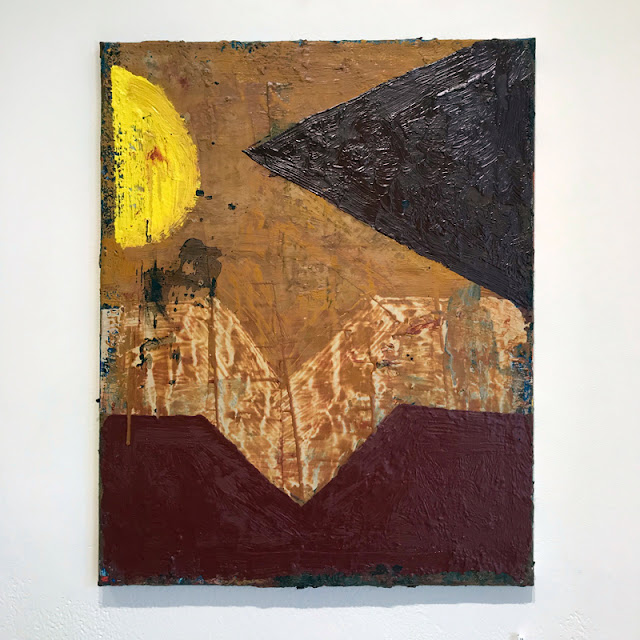 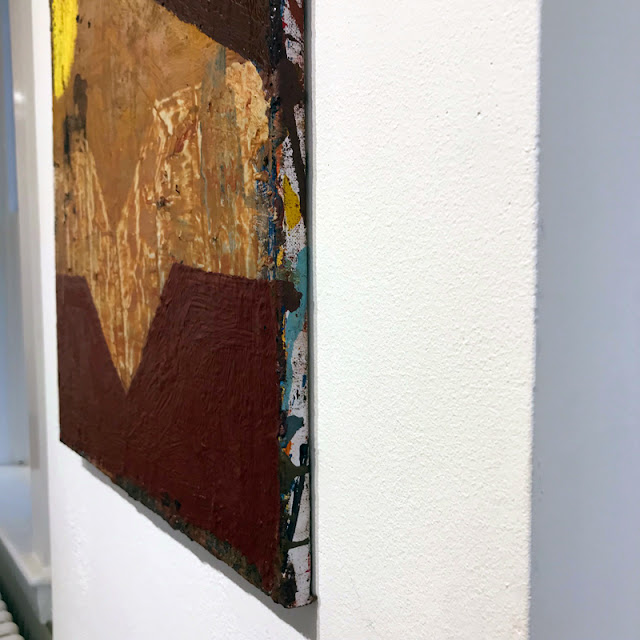 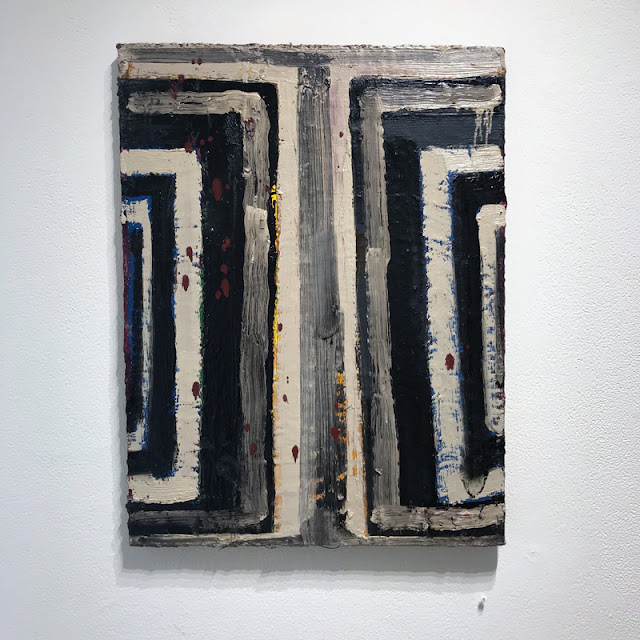 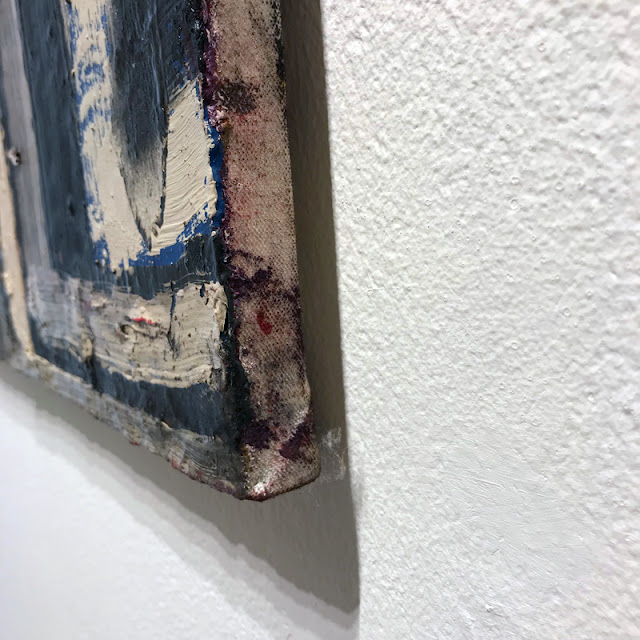 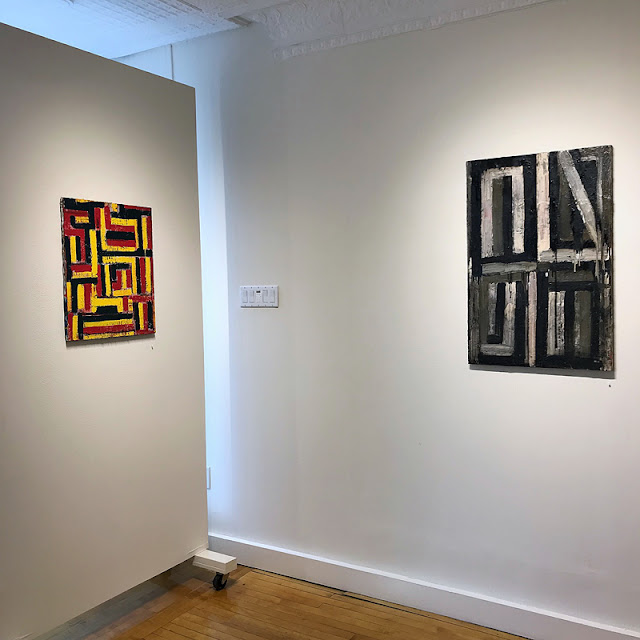 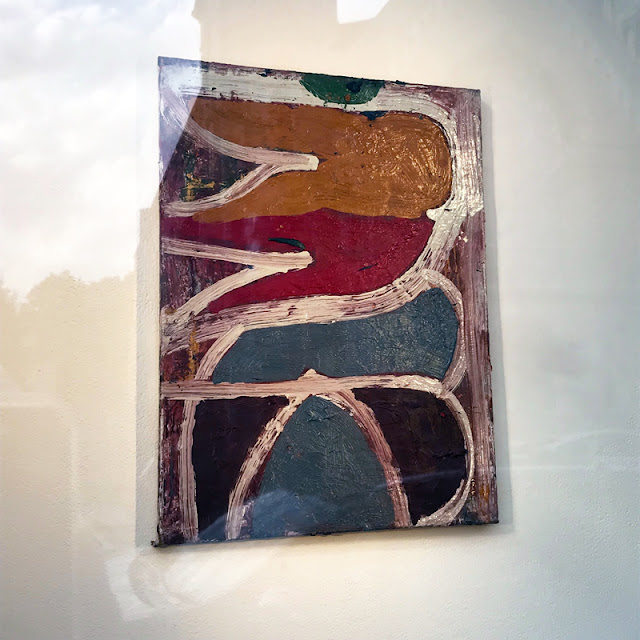 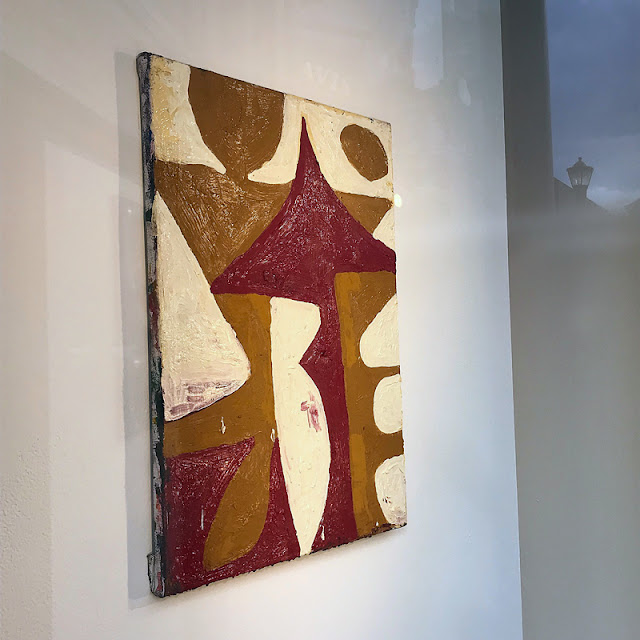 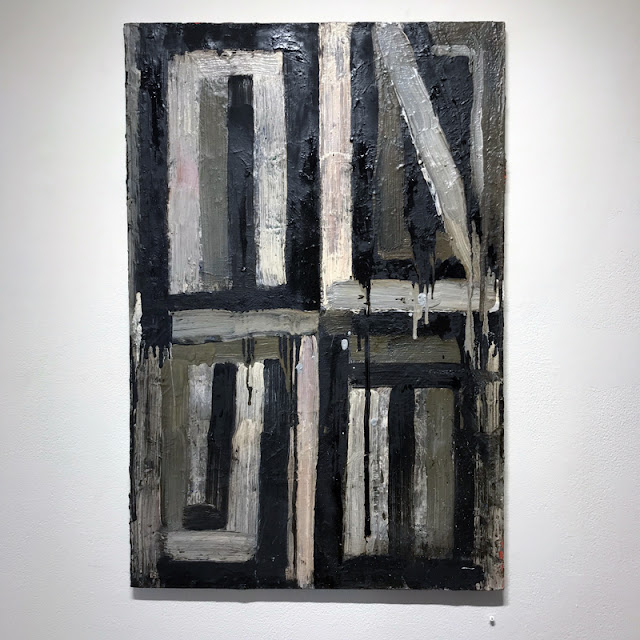 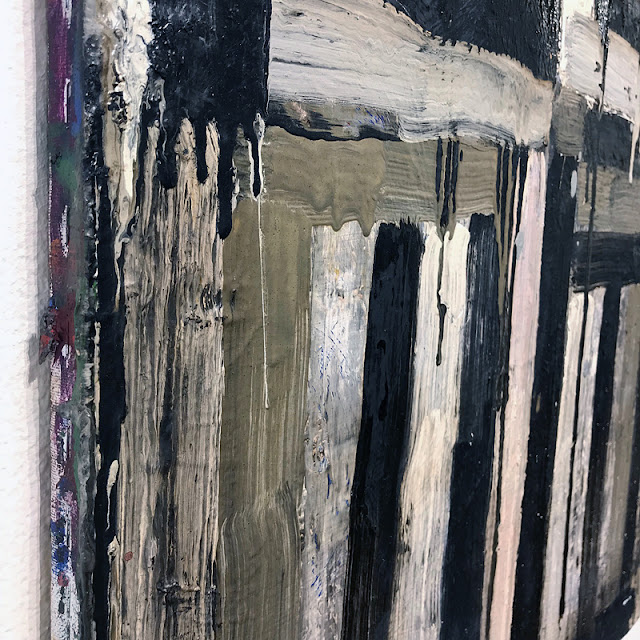 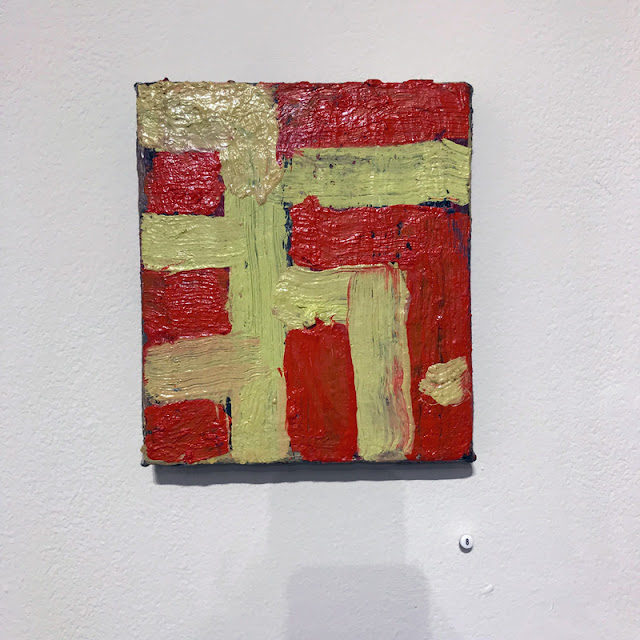 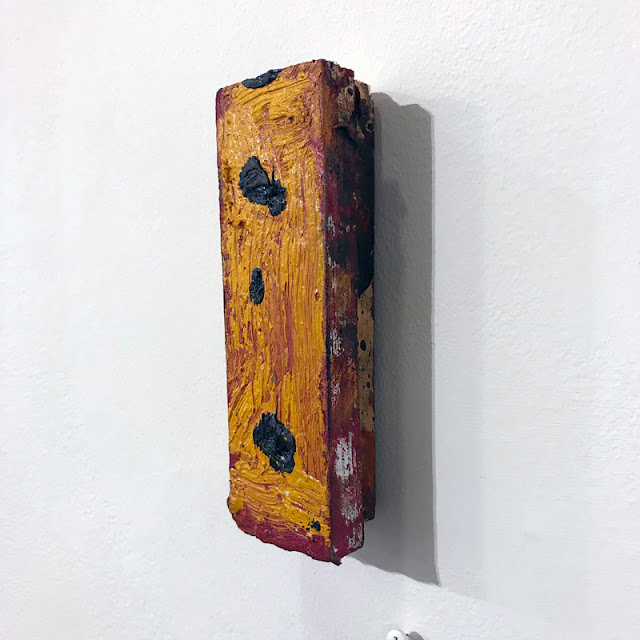 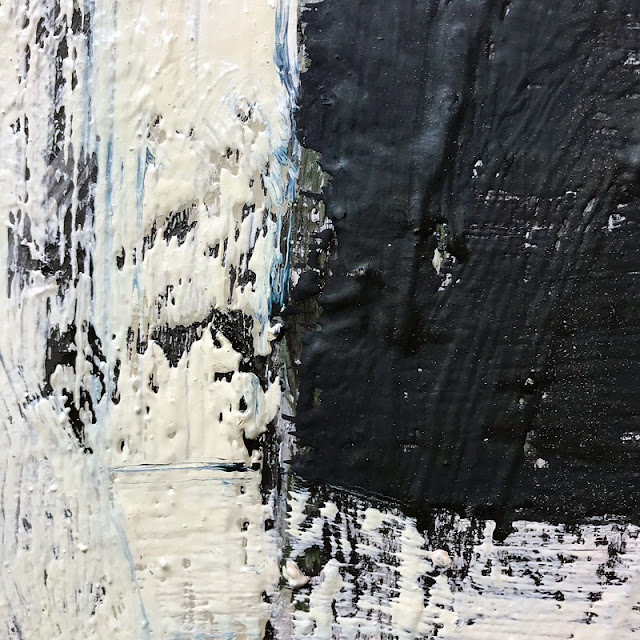 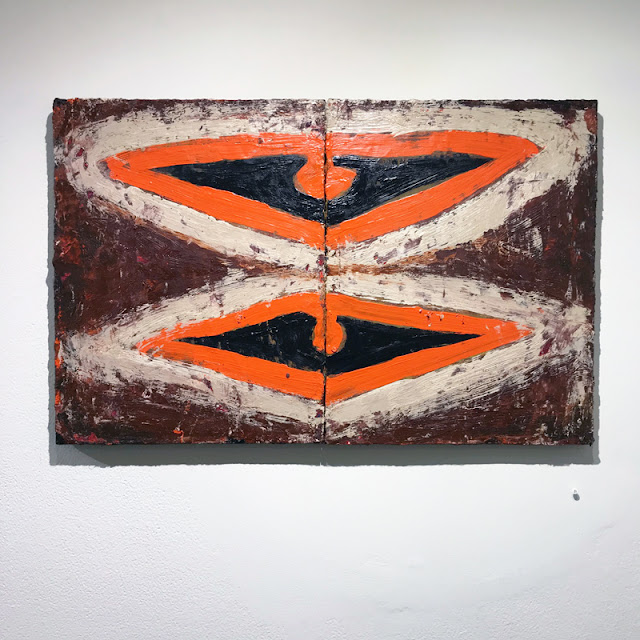 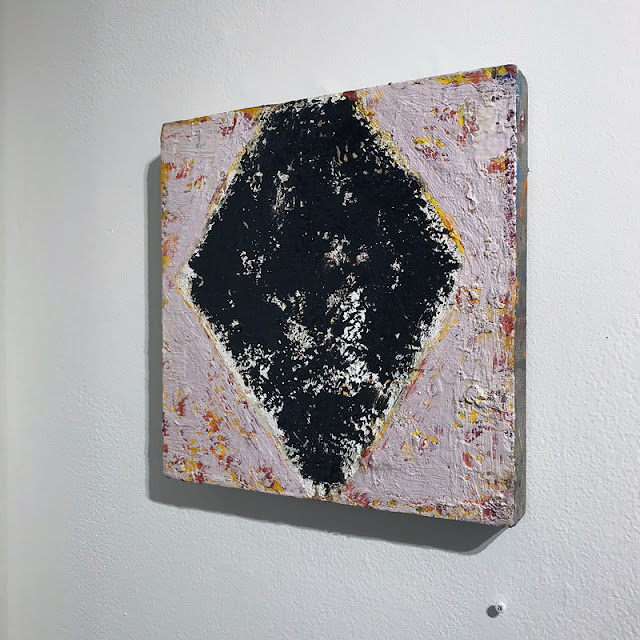