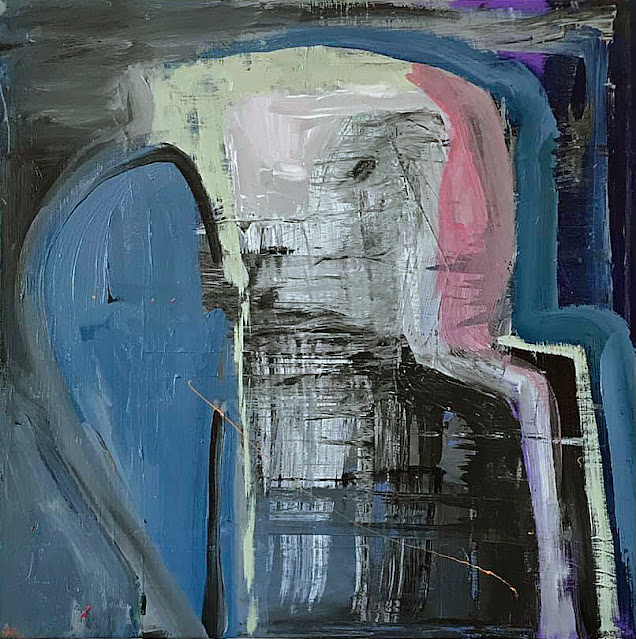 Loverman (the Guardian), 2020, acrylic on canvas, 18 x 18 in.
New in the studio: Small works concentrating on formal elements, dissolution of form, and broken color. 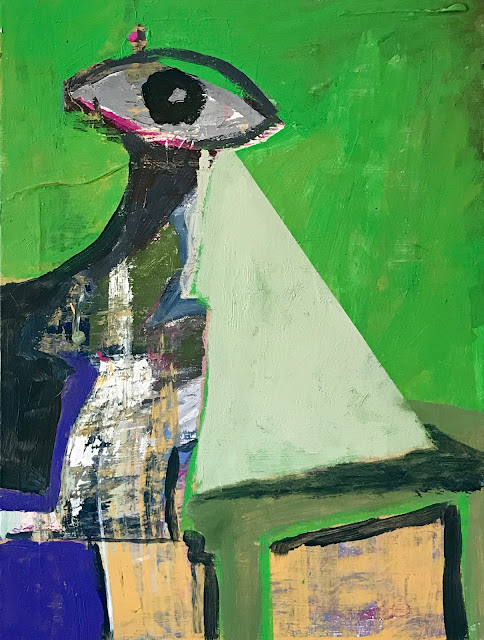 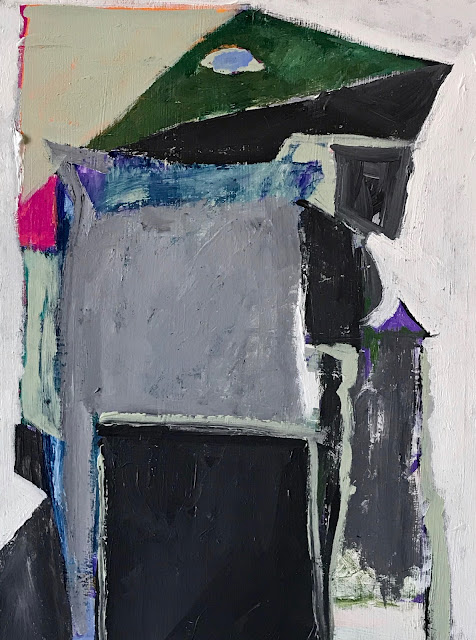 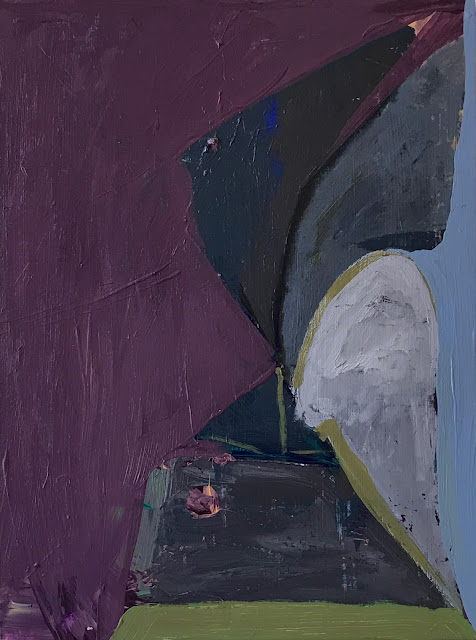 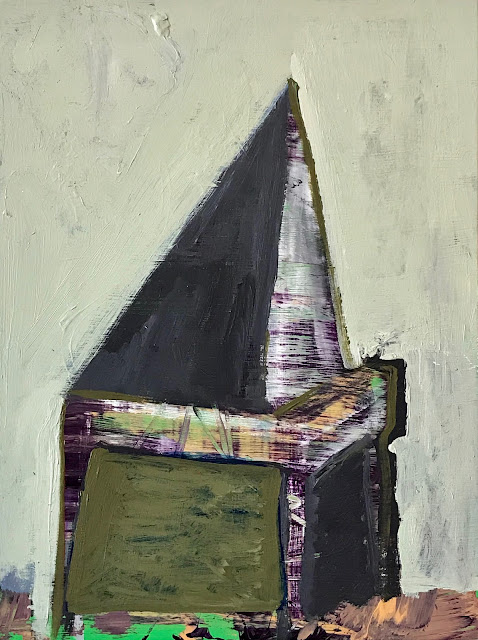 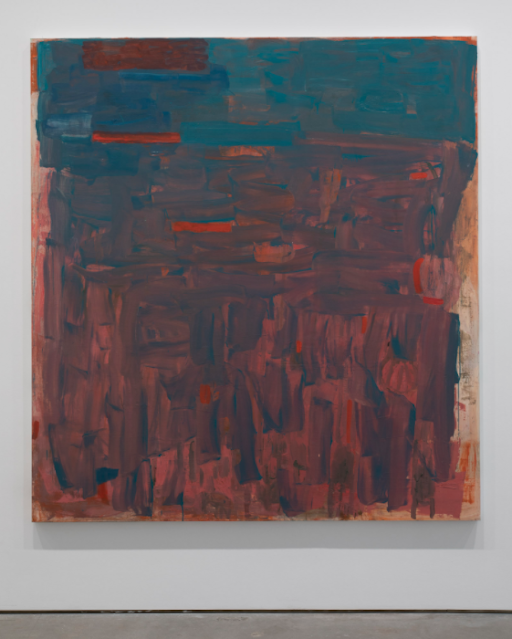 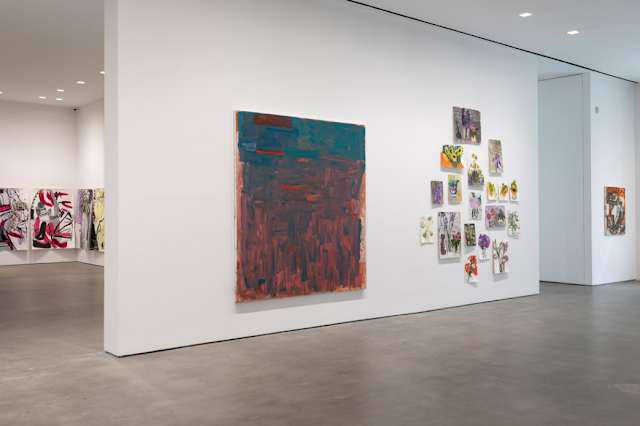 The time we’re living in is crazy, horrible, almost medieval with disease, increasing police brutality and militarization, diminishment of democratic rights, and the upcoming ledge of a terrifying election. I was supposed to have a show of drawings and paintings last May at Gladstone and titled it “Twice Removed”: "twice" to propose the idea of a multiplied subjectivity, being of two minds, forked paths, and having allegiances to both subject and object, thinking and feeling, abstraction and figuration, form and content, dialectics and contradictions; "removed" because my paintings are built through negation, a kind of violent erasure, scraping down, undoing, getting rid of. But twice removed was also a pun on the family relation, being adjacent to something older. I’m a knight’s move away from the old tradition of gestural painting, but I’m really not trying to kill the father: I love gestural painting like it was my grandma, even though I’m skeptical, pessimistic, and sometimes critical of what she stands for. (My mom always said I was too negative.) So I was also thinking about painting as an unrolling of time—both my own genealogy and the way I wanted to unfurl paintings and drawings in long horizontal sequences around the room. I wanted the work to be like scraps and fragments, a bunch of spare parts, puzzling things dug up archeologically, arranged around the rooms of the gallery in a frieze of tangled patches. I was already thinking bleak thoughts about America, and the work looked like it: melancholy, mostly only black and white, ambiguous, often either too raw or over-cooked, ambiguous. I was trying to make a new language out of a bunch of spare parts.

That show was postponed due to Covid19 and will now open in late September. But the new show is an even more shaggy, complicated affair, containing all of the above plus all the new work from this agonizing spring and summer shuffled in. For much of this time, I didn’t have a painting studio, so I just drew flowers, the opulent irises, daylilies, and sunflowers that were springing up around me from bushes and trees and from the earth. As Lorraine Hansberry asked (in her 1962 play), “what use are flowers?” I was obsessed with their colors and shapes, the simple joy of observing them, and how they exude libido, healing, and rebirth, even though while I was drawing them I was wondering if we might all die. Were they funerary or optimistic? During this spring, painting itself was overshadowed by the question of whether painting-life could continue to exist at all. But after months of the flowers, they started to morph into abstractions. The flower stems looked like the legs of figures stalking around, their heads bent over in a kind of looped narrative with no particular story except growth and then withering. The world’s ground was shifting, so I started concentrating on the fields behind the figures— patterns, plaids, and confusing figure-to-grounds, a purposefully destabilized signal-to-noise ratio. And eventually, it was the process of improvisation itself that seemed the most timely and urgent. I was thinking about a quote by Fred Moten, “improvisation is making nothing out of something.” In this sense “nothing” is a good thing, it means you’re in a hole, on the brink of change, and you have to listen, to pay attention. Improvising is a process that comes from within and that proposes a without, a nowhere that is everywhere. The hard questions continue (how to keep making paintings at all, if the world can possibly be rebuilt, and how) but I hope there's an alchemy in there, a use, in keeping on working with the motion between the known and an abstract (but felt) unknown. 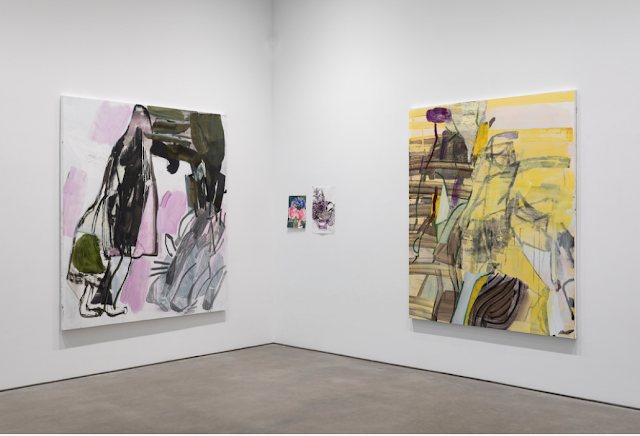 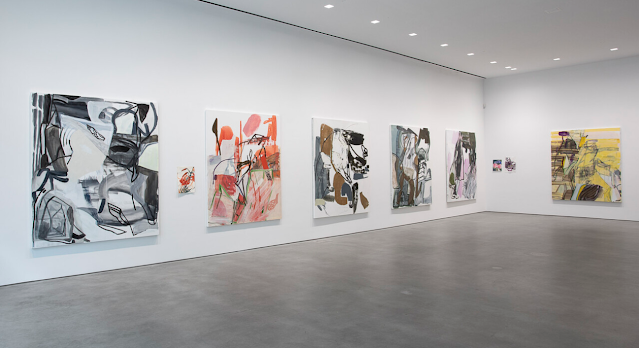 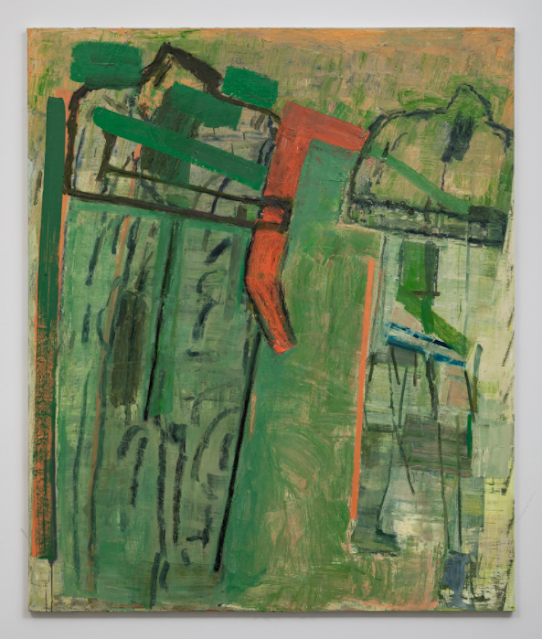 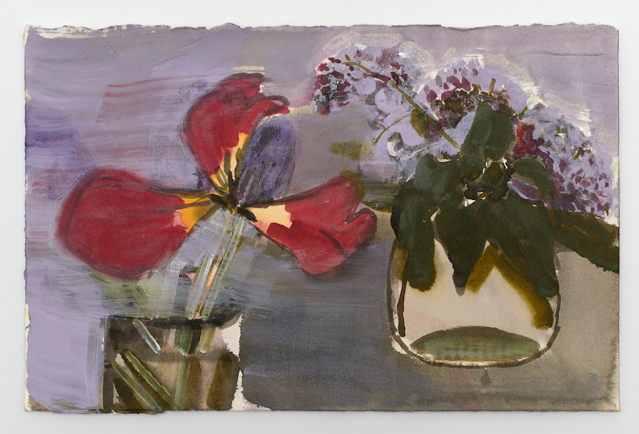 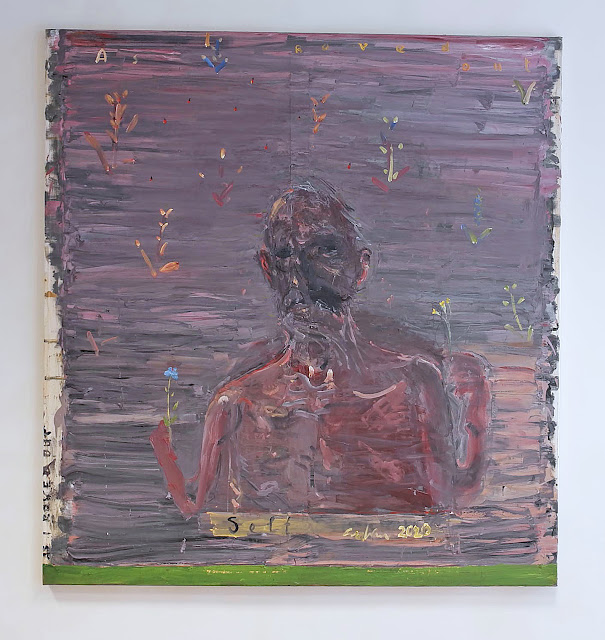 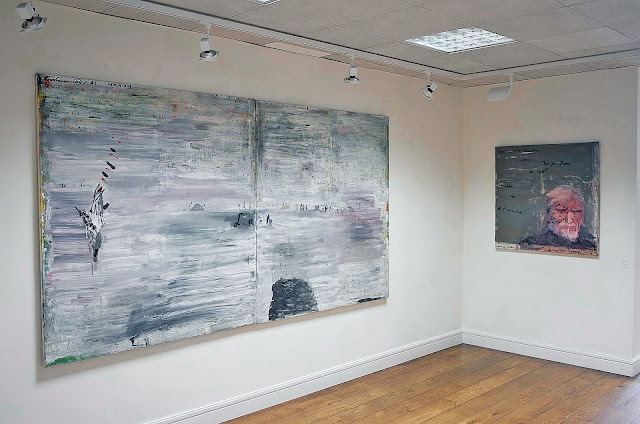 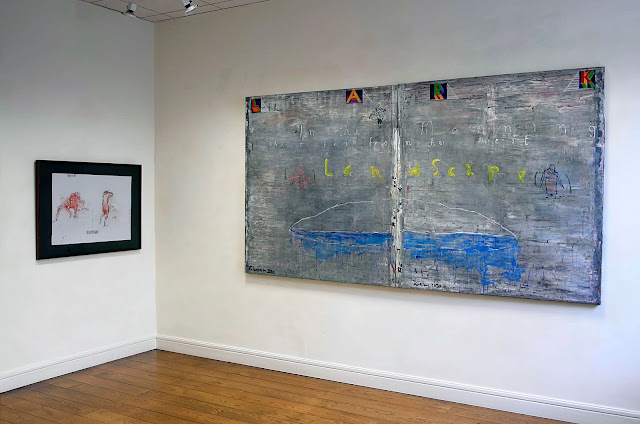 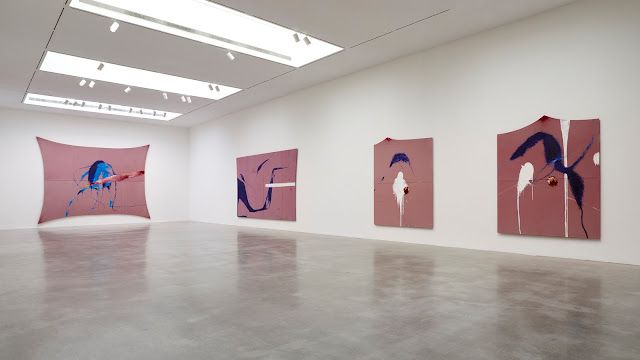 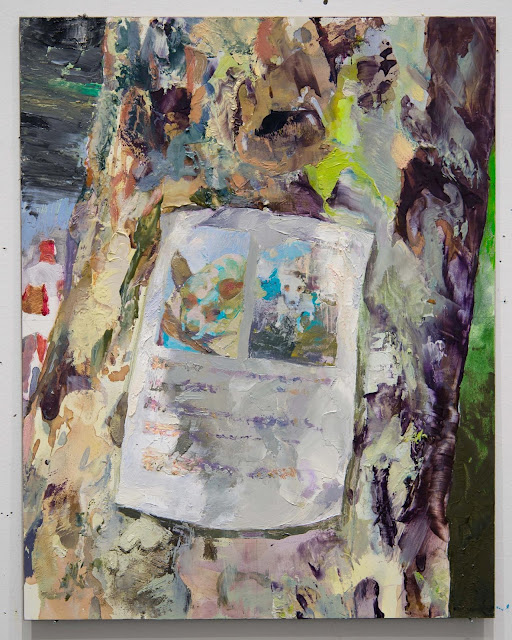 Please dm to RVSP.
A limited amount of people are allowed in at a time.
A mask must be worn.
Hand sanitizer provided.
on October 14, 2020 No comments: 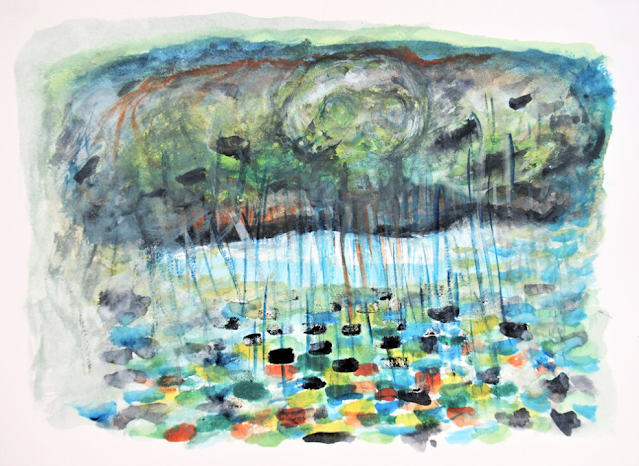 From the Press Release:
"The new work presented here is a response to, and an interpretation of, nature and the awesome sway it exerts on us. These modest and elegiac watercolors allude to a feeling of beautiful helplessness that we often experience in response to the seemingly arbitrary acts of nature, and by extension, to our times.

But the paintings also support an underlying humanity - a joining with (in death?), or perhaps a transcendence from, an irrational, subjective megacosm. This ingredient, more than anything, confirms the poetic sensitivity in the work." 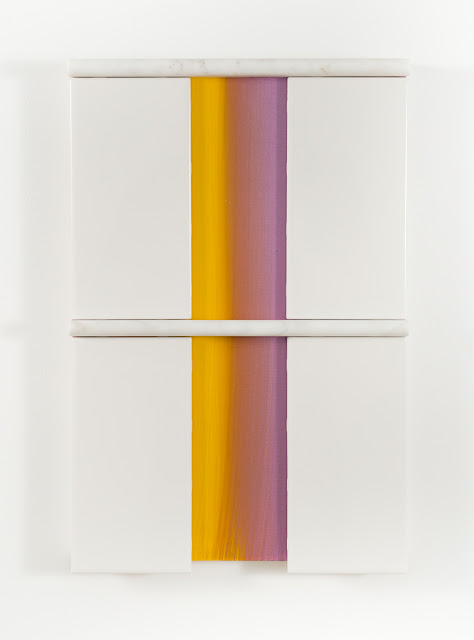 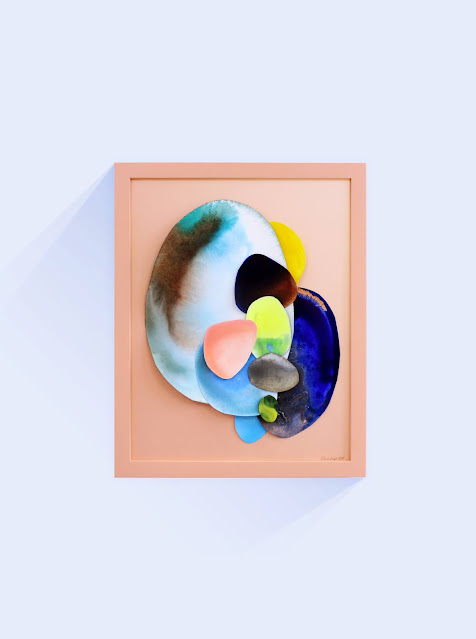 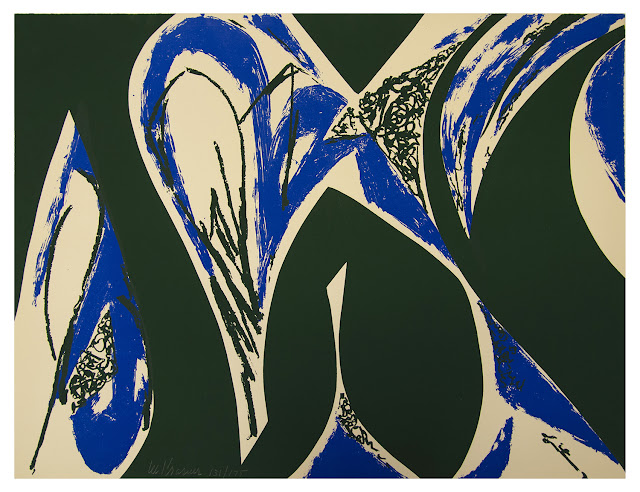 The Robert C. Shields American Series is an annual event that shares, with our regional audience, the rich art history and culture of our nation. Represented in these exhibitions are many of the key artists and artistic movements responsible for creating an American art legacy. This will be the 13th year we have offered this series and it continues to gain momentum and respect in the community for the rich visual perspectives it offers on American art.

The hierarchy of distilled form, immaculate line, and pure color came close to being the mantra of 1930s modern art—particularly that of American Abstract Artists (AAA), the subject of a new exhibition entitled Blurring Boundaries: The Women of American Abstract Artists, 1936 – Present. From the outset—due as much to their divergent status as abstract artists as to their gender—women of American Abstract Artists were already working on the periphery of the art world. In contrast to the other abstract artist collectives of the period, where equal footing for women was unusual, AAA provided a place of refuge for female artists. Through fifty-four works, Blurring Boundaries explores the artists’ astounding range of styles, including their individual approaches to the guiding principles of abstraction: color, space, light, material, and process.

More than eighty years after its founding, AAA continues to nurture and support a vibrant community of artists with diverse identities and wide-ranging approaches to abstraction. In celebration of this tradition, Blurring Boundaries: The Women of American Abstract Artists traces the extraordinary contributions of the female artists within AAA, from the founders to today’s practicing members. Included are works by historic members Perle Fine, Esphyr Slobodkina, Irene Rice Pereira, Alice Trumbull Mason, and Gertrude Greene, as well as current members such as Ce Roser, Irene Rousseau, Judith Murray, Alice Adams, Merrill Wagner, and Katinka Mann. 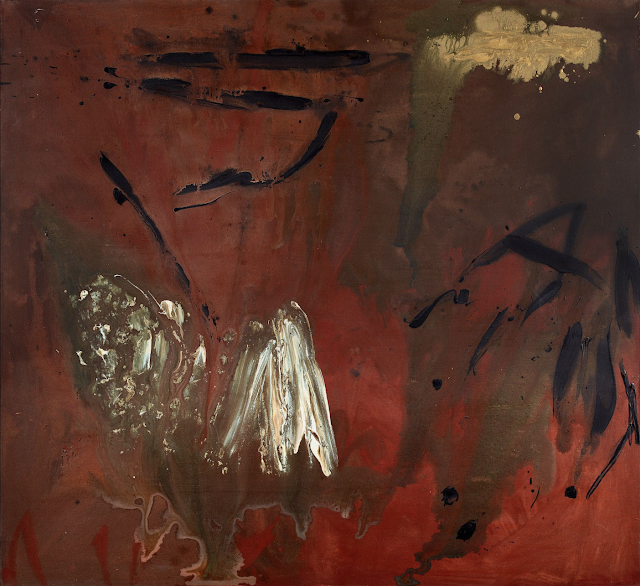 COVID-19 precautions will be observed. 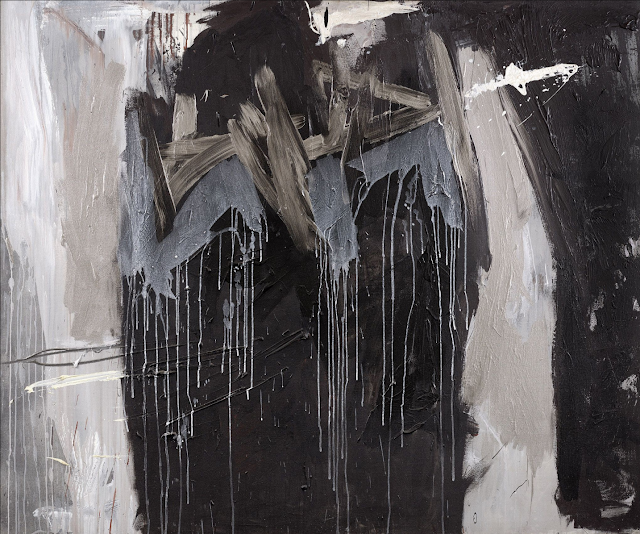 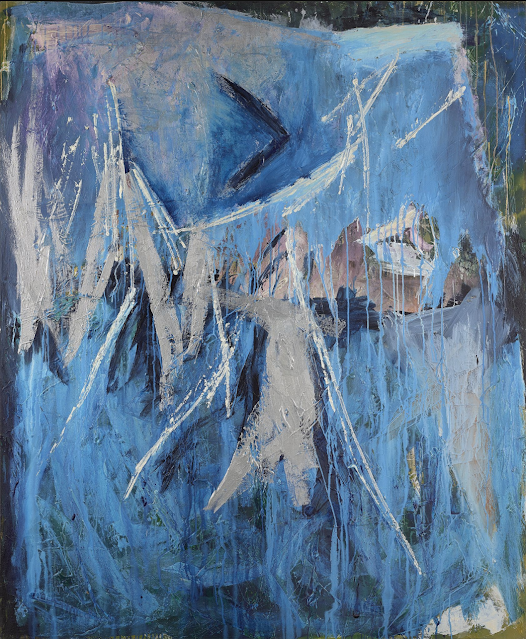 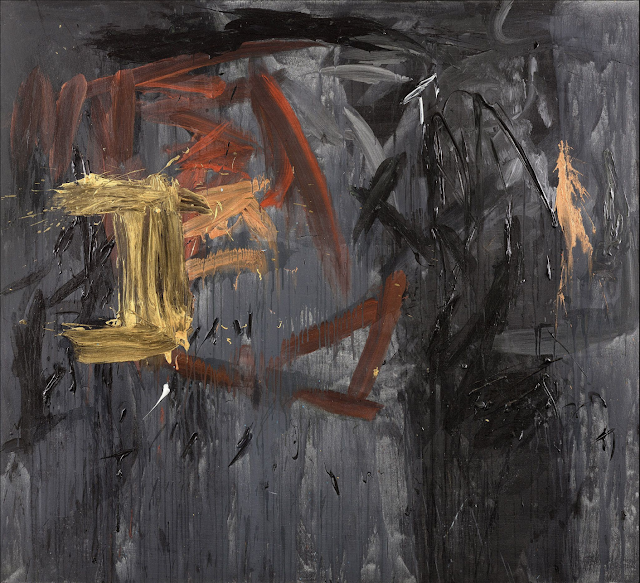 [i] Kali is associated with Shiva (as his consort, wife, or associate), a god of destruction and creation. She is depicted with either four or ten arms and is usually dark-skinned (black or blue), indicating that she was created from darkness when the creation had yet to occur. Her features include eyes that are red with intoxication and rage, sharp fangs, claw-like hands with long nails, a red tongue that extends outward, and hair flying and disheveled. She is often shown on a battlefield, wearing a garland of human heads, which represent her killing rage but also her creative powers (the heads symbolize the letters of the Sanskrit alphabet and the beginning of language). Many images portray her naked (conveying her purity) and dancing, standing with her right foot on Shiva’s chest, holding a Khadga (a crescent-shaped sword) in each hand as well as a severed head and a cap to collect its blood. See David R. Kinsley, Hindu Goddesses: Visions of the Divine Feminine in the Hindu Religious Traditions (Berkeley, Calif.: University of California Press, 1988), pp. 116–31.[ii] Jane Livingston, Five Washington Artists, exh. cat. (Washington, D.C.: Corcoran Gallery of Art, 1976).[iii] Barbara Gold, “Five Plus One at Corcoran,” The Sun (Baltimore), September 26, 1976, p. D8.[iv] Margaret Seaver, “Ann Purcell, A Self-Assured Artist,” The Summer Advocate (Provincetown, Massachusetts), August 16, 1984.[v] Benjamin Forgey, “Washington, D.C.: Catching Up with Morris Louis,” Art News (November 1976), p. 104.[vi]  Dan Cameron, “Ann Purcell,” Arts (November 1983).[vii] Pamela Kessler, “Four Artists in Search of No Subject,” Washington Post, September 25, 1987, p. WK47.

In Common Writers Series: John Yau and Andrew Joron, Reading and in Conversation 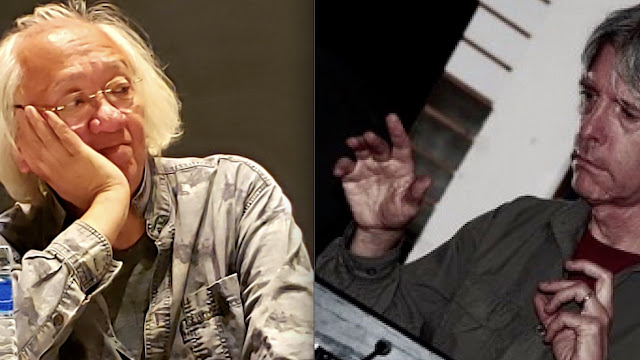 For the last program in The Poetry Center's In Common Writers Series for 2020, we are delighted to host renowned poet and art critic John Yau, appearing from New York City for two dates. He's joined Thursday, October 15 by poet, translator, and SF State faculty member Andrew Joron, each of them reading their poetry and talking with one another and in response to questions from the audience. Then, on Saturday evening October 17, Yau is reading and in conversation, focusing on his work as art critic and curator, with poet/performer and editor of Open Space at SFMOMA, Claudia La Rocco, with emcee Brandon Brown. Thursday night's emcee is Carlos Quinteros III.

This remote-access event starts promptly at 7:00 pm Pacific Time and is free and open to the public. Real-Time Captioning provided here. For other reasonable accommodations please contact poetry@sfsu.edu.

The In Common Writers Series is supported by the Walter & Elise Haas Fund.
(info)

If you think the next President

is going to improve your quality of life

you choose to believe

that war is a three-letter word

that does not affect anyone it touches

except the tender pages of youth

You know, those dirty sheets

before they die between blinks

—John Yau, from Bijoux in the Dark

John Yau is a poet, fiction writer, critic, editor, curator, and publisher of Black Square Editions, a small independent press that has published books and broadsides of poetry, fiction, criticism, and translation, as well as prints. He has contributed to essays in many catalogs and museum publications, as well as written for Art in America, Artforum, Art News, New York Times, Los Angeles Times, and Art Press. His work is included in many anthologies of poetry, fiction, and criticism, and has been translated into French, German, Italian, Portuguese, Spanish, and Chinese. After serving as the Arts Editor for the Brooklyn Rail (2007–2011), Yau left and helped start the online journal Hyperallergic, where he frequently posts his reviews.

Yau is the author of over 40 books, recently Bijoux in the Dark (poetry, Letter Machine Editions, 2018), The Wild Children of William Blake (essays, Autonomedia, 2017), Foreign Sounds or Sounds Foreign (essays, Madhat Press, 2020), and artist monographs on works by Philip Taafe (Lund Humphries, 2018) and Suzan Frecon (David Zwirner Books, 2020). He has received fellowships from the John Simon Guggenheim Memorial Foundation, National Endowment for the Arts, Academy of American Poets, New York Foundation of the Arts, Ingram Merrill Foundation, and the General Electric Foundation. Yau was named a Chevalier in the Order of Arts and Letters by the French government in 2002. He is a Professor of Critical Studies at Mason Gross School of the Arts (Rutgers University) and lives in New York. More at poets.org

Andrew Joron is the author of The Absolute Letter, a collection of poems published by Flood Editions (2017). Joron’s previous poetry collections include Trance Archive: New and Selected Poems (City Lights, 2010), The Removes (Hard Press, 1999), Fathom (Black Square Editions, 2003), and The Sound Mirror (Flood Editions, 2008). The Cry at Zero, a selection of his prose poems and critical essays, was published by Counterpath Press in 2007. From the German, he has translated the Literary Essays of Marxist-Utopian philosopher Ernst Bloch (Stanford University Press, 1998) and The Perpetual Motion Machine by the proto-Dada fantasist Paul Scheerbart (Wakefield Press, 2011). As a musician, Joron plays the theremin in various experimental and free-jazz ensembles. Joron teaches creative writing at San Francisco State University.