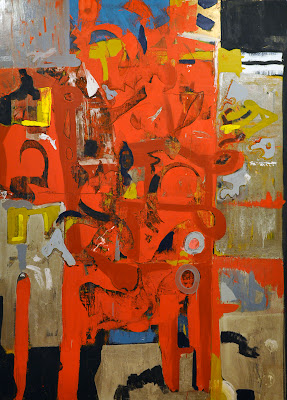 Webb’s paintings can be divided into two camps: The still, dark, and moody nocturnes and seething, molten, pits of head-jerking activity.
The centerpiece of the show, Café, an imposing 98 x 136 inches, falls into the second category. It’s a constant push and pull of red, blocky chunks struggling to break free from, but sometimes succumbing to a dark ground, and keeps the eye darting from mass to curvilinear squiggles to brittle scrafitto to scumbled haze. Black/ midnight blue jig- sawed portions punch through from the ground, at times dominating their hot neighbors.
Two canvases abut one another. And though the composition flows smoothly from one picture plane to the next, the entire work feels off kilter owing to the fact that the right side is wider than the left. So in a sense the overall borders both contain, and add, to the general amino acid stew confusion of the form and color within.

Idiosyncrasies abound in Webb’s work. Contemporary color choices lay alongside the more traditional Ab-Ex palate. A cold silver can dully seep through an over painting or anchor a corner. And a spindly white bar in a lower right corner can seem to do both at once when previously placed layers of lemon and an acidic green are left exposed.

High Tea is another large piece worthy of mention. The overall approach is the same as with Café. The palette is more varied, and the vertical orientation, along with the infinite variety of smaller forms, threatens to overwhelm the viewer like a swarm of bees. Golden mustards and dark abstract forms move in front of and behind one another, adding to the onslaught as the bright red center and the vertical divisions give the impression of a totem set afire.

Webb’s Duet, a nocturne of sorts, is much less imposing at 24 x 32 inches. Here is another whole comprised of two parts. But the division is equal and allows for a more stable platform from which to plumb the subtleties of the painting. However, the seam where the two panels meet could be a wall stopping each composition short.
The respective sides are painted a matte black with glossy black looping line work over the top. These languid currents interact with the harsh white lines that become objects in the mind. White drawings seek to communicate separate statements to the viewer simultaneously like a vaudeville team singing rounds. On the right, a hole, seemingly carved into the panel, reveals an oblong swath of under painting, a patch of rubbed out grey black, dotted clumsily with blue daubs. A touch of smudged rusty red at the bottom of this pool relates to a bright red square on the bottom border that serves to anchor and hold the composition together.

Another somber stand out is the forlorn Gallop. Halfway between Duet and High Tea in size, this piece comes closest to depicting the natural world. Black and grey are divided along a horizon line. Undulating, dirty and thick, olive lines bisect the grey earthlike form, while the black upper half of the canvas slowly reveals haphazard misty orange triangles. The triangles try their best to be seen through the blanket of black, but the best they can do is pulse like porch lights off a highway seen through a suffocating fog.

If Webb’s work depicts the morass of everyday living and the urge to break free of it, then René Pierre Allain’s work offers a minimalist glimpse of that longed for transcendence. Works such as Modifier contain scraps that relate to and, at times, actually mirror Webb’s work (due to their reflective surfaces), but, on the whole, Allain offers paired down expanses that hint at a more transcendent state. In the aforementioned Modifier, formalism reigns, but the materials can interact and produce unexpected results.  Here a chromium oxide green on the far left edge seems to eat away at the dry brushed canvas colored field that makes up most of the work. While on the far right, a burnished metal rectangle bookends and completes the composition. The metal surface captures and holds the viewer’s attention with its films of inky blacks and seeming washes of dark greens and blue grays. As in other works, this brushed metal portion is worth its weight.  It provides a gravitas while enlivening the surface all at once. These portions, along with the thin metal frames, allow the paintings to become true objects -- hybrids of paint and plate.  Many of these parts, as in Steele Bar #5, showcase scorched lines, dripping dots, and splatters that attest to the accident of production and the willingness to exploit chance by the maker.

Also on view is Allain’s collection of tribal masks. The known ceremonial function of which play a conceptual and formal role in linking the works of the two painters. The duty of the shaman, medicine woman or witch doctor is to act as a go-between and conduit between this world and the next. The inclusion of the masks and their placement as a group, between a piece by each painter, is inspired and only enhances the currents that run through each body of work.