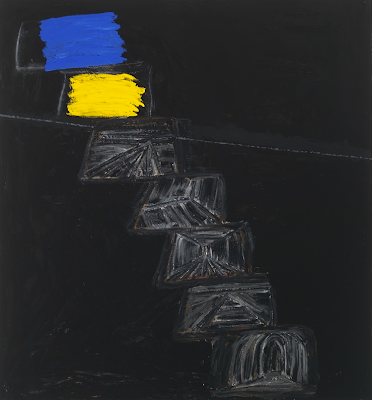 Above and Below by Basil Beattie

Basil Beattie RA is a major figure in the British avant-garde of the late twentieth and twenty first century. Celebrated for his powerful, large scale abstract works, Beattie has become one of Britain’s most respected abstract painters. Beattie was short-listed for the Jerwood Painting Prize in 1998 and 2001. This awe-inspiring exhibition, guest curated by the art historian and critic Mel Gooding, puts into focus Beattie’s most recent work, largely unseen, which shows the continuing influence of American painting from the late fifties, particularly Mark Rothko and Philip Guston.
Many of the paintings in the exhibition feature step motifs, Beattie says of these, "The staircases do not touch the top of the canvas and they don't touch either side. That for me is intriguing, that [there are] ways that look as if one can be optimistic - there's always perhaps the possibility that they don't lead anywhere."