For this installment of my In Process feature, Matthew Fisher offers this meditation on drawings and how they lead up and relate to, a finished painting. 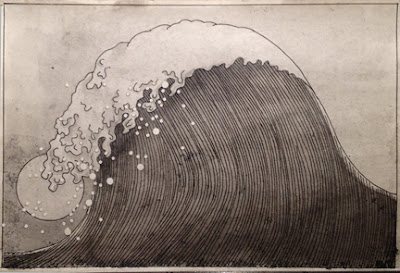 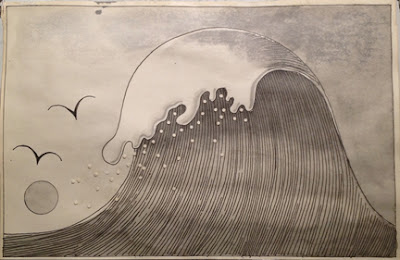 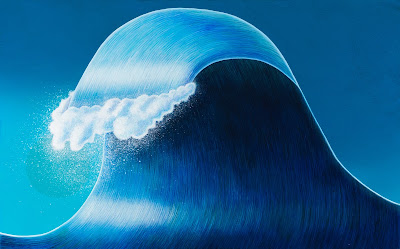 
From the Artist's Statement:

Drawing is a lot like a one night stand for a swinging single. They come. They go. Some hang around for weeks, others are almost forgotten as soon as they're made. Every once in awhile you have a chance encounter with them again, taken back by how nice a drawing was; or worse, what was I thinking then? Flipping through my box of completed drawings this summer, I came across Untitled (2012) and was stuck by the weight of one lone wave rising up from the sea, blindly rolling across the ocean, searching for land, or a sandbar, to complete it's journey with a crash. Reworking the image this year, my drawing style had evolved to include more detail. Tilting the horizon line counter clockwise in Louis' Swing (2013), the wave was given a greater sense of direction and speed: the unlevel waterline, higher on the back, caused the weight of the wave pushing down on open sea as the cascading wave drowns out the sun. Hanging around on the studio wall, Louis's Swing became the inspiration for The Olympians. A portrait of a frozen wave whose top is moving faster then it's body, toppling as it becomes one again with the ocean that spawned it. From the ocean, to the ocean – dust to dust, water to water. 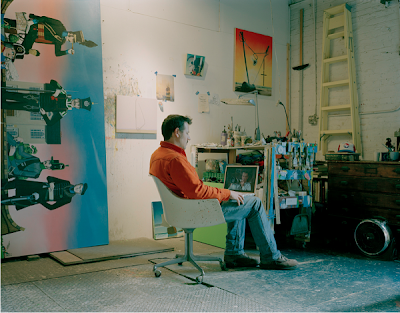 Matthew Fisher in his studio.
Photograph by Lajos Greenen

Matthew Fisher is represented by ADA Gallery and Mulherin + Pollard.

See more of Fisher's work in his upcoming one person exhibition at Ampersand Gallery in Portland, OR - March 2014.

Email ThisBlogThis!Share to TwitterShare to FacebookShare to Pinterest
Labels: In Process, Matthew Fisher

Nice. I like the drawings and the painting very much. Thanks Paul