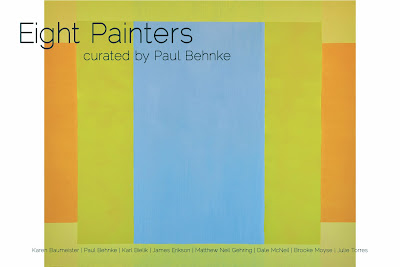 Postcard image: Matthew Neil Gehring, For Whom this Glen is Sacred, 2013, oil on canvas, 78x84 in.
(click to enlarge)


I am organizing a show for Katheryn Markel Fine Arts and hope you will be able to join us for the opening on January 4th.


The exhibit draws inspiration from group exhibitions of the 1940’s and 1950’s, before clever curatorial themes consistently dictated the work to be included in group shows. Eight Painters’ only criteria for inclusion are an individual vision, a certain ambition that transcends any specific scale or way of working, and an abiding belief in the ability of paint and the genre of abstraction to best communicate that ambition and vision.


“Painting is feeling. There are situations, states of mind, mood which call for some form of artistic expression, because one knows that only some form of art is capable of going beyond them to give us intuitive contact with a superior set of truths.”


The opening reception for Eight Painters will take place on Saturday, January 4 from 6 – 8 PM.

I will try to make this and say hello. It's been a while. Hope you're well.