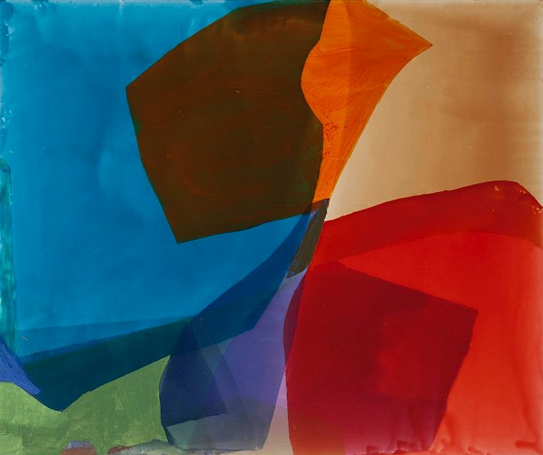 Berry Campbell is pleased to announce the opening on May 28th, 2015 of an exhibition featuring Jill Nathanson, an artist who has worked to reimagine the tradition of Color Field painting. Using a technique of pouring acrylic polymers, Nathanson’s paintings are characterized by coloristic inventiveness, as the pours create new hues by overlapping layers of translucency. Her paintings evoke what she calls “color desire,” as the fluidity of the forms engage us in seeking color resolutions across the pictorial field, while drawing us to the different spaces that the colors occupy and the ways they attract and repel each other.
Nathanson became fascinated by color painting at Bennington College, Vermont. She arrived at the school in the mid-1970s, when it was at the center of color field abstraction. From Kenneth Noland and Larry Poons, she learned to avoid composing through dark and light tones and to give color an ever-greater role in structuring a painting. Over the last four decades, she has deepened her exploration of color dynamics, seeking to transmit affective realities of seeing. She courts chaos in her method, through employing chance, but she also works methodically—each overlay of color takes a day to dry.  For the viewer, her paintings evoke energies in the body as well as optical experience, and the physical presence of each painting resists immediate assimilation, involving a dynamic, layered search for unity.
After her time at Bennington, Nathanson received her MFA from Hunter College, City University of New York.  Her first solo exhibition was held in 1982 at Virginia Polytechnic Institute and State University, Blacksburg. Subsequently she has been featured in one-artist shows at many venues, including Hunter College; Roanoke College, Virginia; the Philadelphia Museum of Jewish Art; the Slifka Center, Yale University, New Haven, Connecticut; the Derfner Judaica Museum, New York; and June Kelly Gallery, New York. She has participated in numerous group exhibitions, including Bennington College, Vermont; Stanford Museum, Connecticut; Danforth Museum, Framingham, Massachusetts; the Painting Center, New York; the National Academy Museum, New York; and Taylor University, Upland, Indiana. Nathanson is included in the collections of Agnes Etherington Art Center, Queens University, Kingston, Ontario; Hines Industrials, Boston; Maimonides Hospital, Brooklyn, New York; and Tufts University, Medford, Massachusetts.