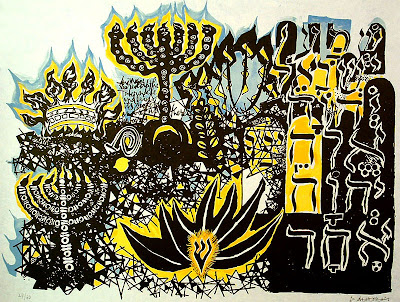 Variations for the Menora...from In the Beginning, 1972 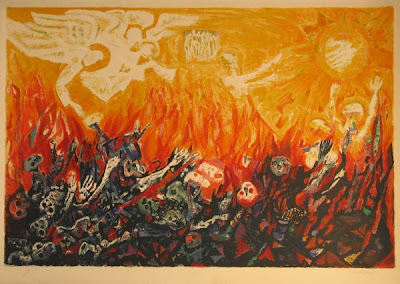 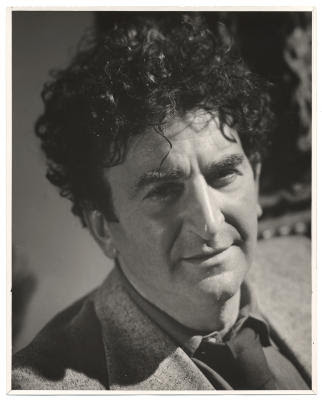 Abraham Rattner (1895 - 1978)
Born in 1895 in Poughkeepsie, New York, Abraham Rattner came to Washington, D.C. to study architecture at the George Washington University and art at the Corcoran College of Art and Design. In 1917 he went to Philadelphia to study painting at the Pennsylvania Academy of the Fine Arts. That same year, the United States entered World War I, whereupon Rattner volunteered to serve in the Army. After the armistice in 1919, Rattner resumed his studies in Philadelphia, but in 1920 went to Paris, studying at times at l’École des Beaux Arts, l’Académie de la Grande Chaumiere, and l’Académie Ranson. During a 20-year residence in France he saw many kinds of art: cubism, surrealism, and futurism. Rattner also met the avant-garde artists in France: Pablo Picasso, architect Le Corbusier, and American expatriate author Henry Miller. Rattner adopted a cubist style, interpreting nature in bold, vibrant color arrangements.
In 1939, with the tensions of World War II increasing, Rattner returned to the United States, where he was quickly recognized as a leading modernist painter and a superb colorist. In 1940, with his friend Henry Miller, Rattner traveled from New York City south to record life in modern America. Miller’s writing and Rattner’s illustrations were published as The Air-Conditioned Nightmare (1945), a quirky chronicle of their travels.
Rattner exhibited his painting in New York galleries until 1947 when personal events altered his artistic style. The public exposure of the horrors of the Holocaust after World War II, along with the death of his wife, caused Rattner to turn away from painting for a time. When he resumed his career, he renewed an early interest in architecture and architectural elements, making designs for mosaic and stained glass. By 1960, Rattner’s designs, in a modern idiom, brought together stories from his Jewish heritage, including religious themes, with references to the Holocaust or to nuclear war, to convey his concern for the human condition. His late paintings are clearly related to his stained glass designs in their symbolic force and in style, namely his use of vivid colors and bold, swooping outlines that unify the compositions. 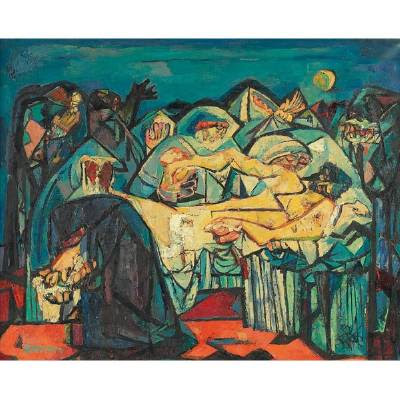 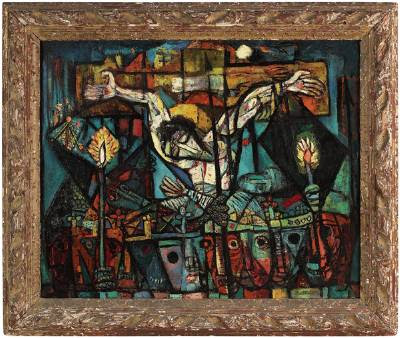 There Was Darkness Over All of the Land 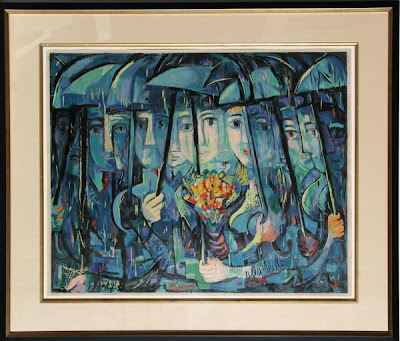 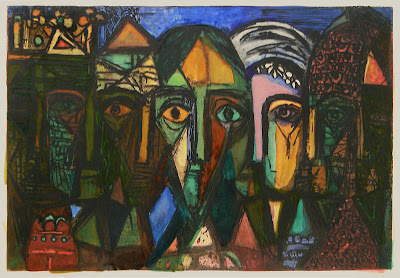 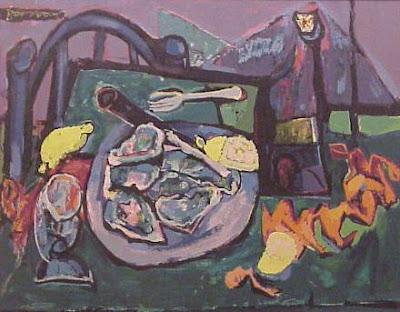 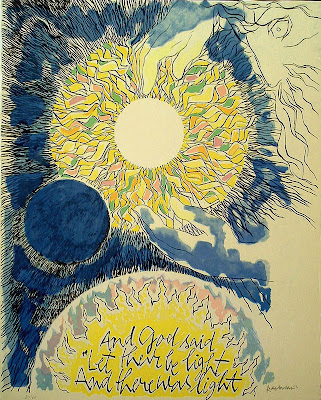 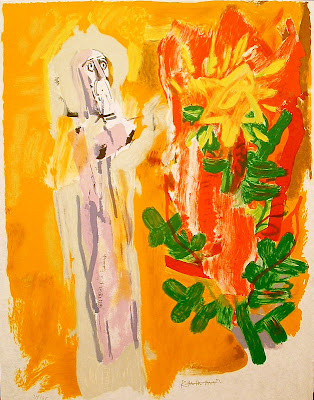 Moses and the Burning Bush...from In the Beginning, 1972 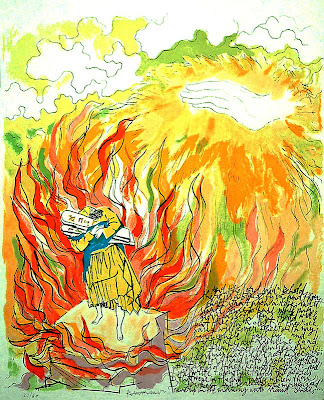 Moses and the Tables of Stone...from In the Beginning, 1972 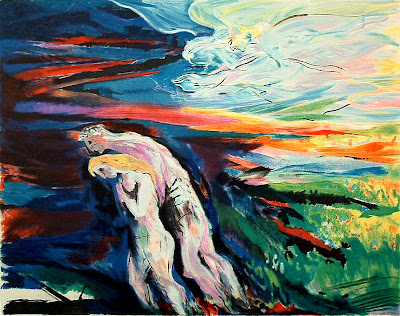 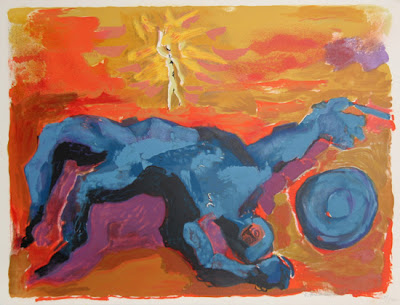 And David Smote the Philistine...from The Beginning Portfolio, 1972 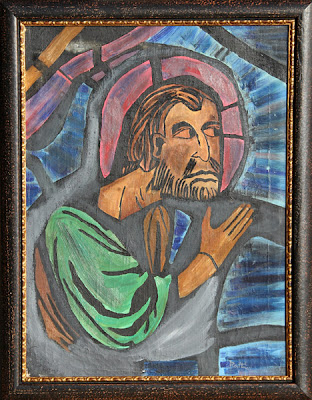 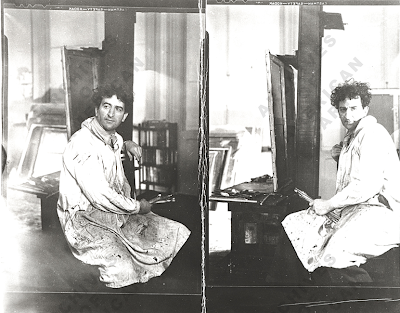 Abraham Rattner in his Paris studio. 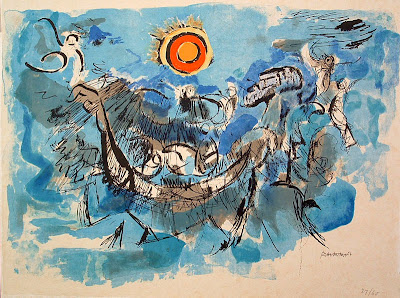 The Annunciation to Noah...from In the Beginning, 1972 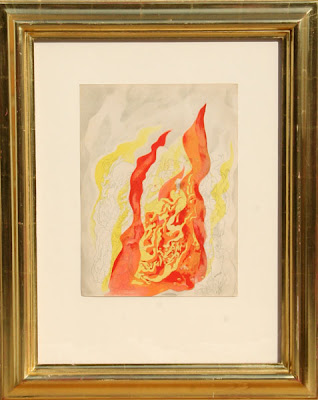 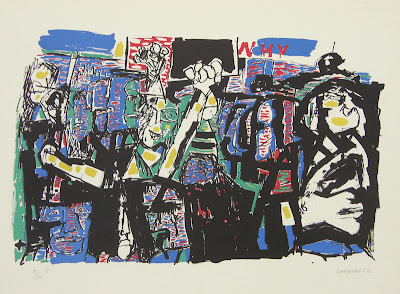 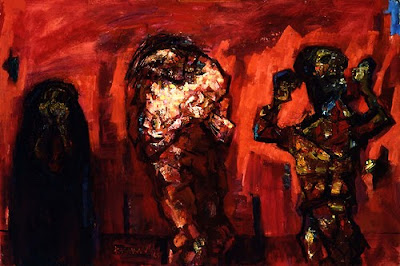 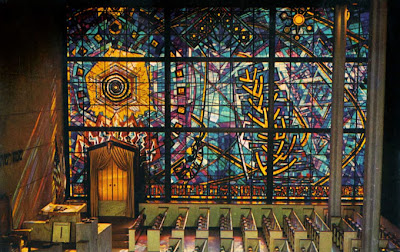 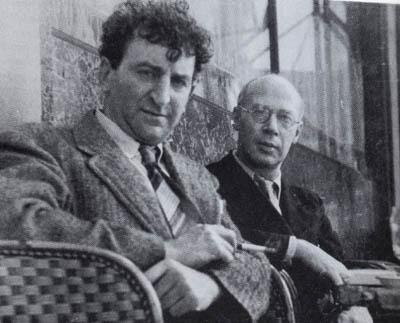 Rattner in 1930 with Henry Miller 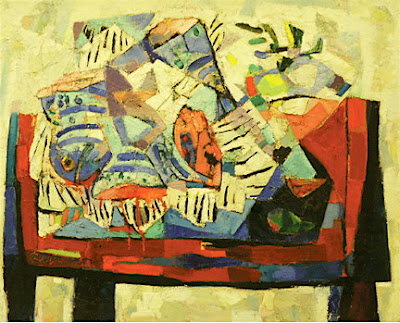 Nice! I have fond memories of my Uncle Abe.

I first became aware of Rattner in 1992 through the writing of Henry Miller.