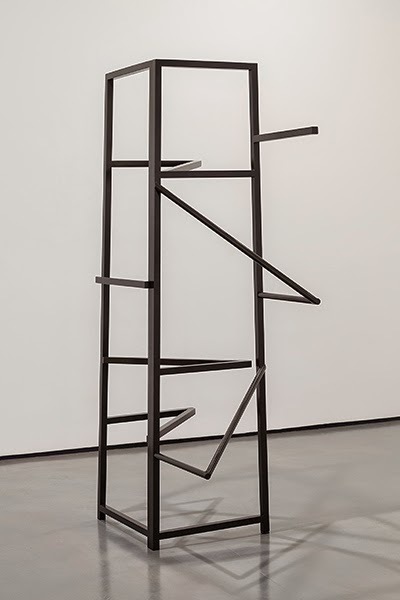 This exhibition will be comprised of recent sculptures from the “Trestles” series. Karen Wilkin writes of the work:

Boepple approaches architectural scale in these shambling, animated constructions, which at once evoke industrial artifacts and creatures able to move under their own power. The delimiting frameworks of the “Looms” and “Trestles” and the instantly recognizable supports of the “Ladders,” have here been subsumed by loose-jointed assemblies of linear elements that seem potentially mobile. At the same time, we are aware of the industrial underpinnings of these exuberant sculptures, faint echoes of utilitarian objects constructed with iron beams that return us to the origins of Boepple’s approach to sculpture, when Picasso and González, for the first time, made works of art using the same techniques that were used to build motorcars and tall buildings. [1]

This exhibition will coincide with the release of a new monograph of the artist published by Lund Humphries. Willard Boepple Sculpture: The Sense of Things is written by Karen Wilkin with a forward by Michael Fried. The publication will be available for purchase from the gallery.

Willard Boepple was born in Bennington, Vermont in 1945, and grew up in Berkeley, California. He studied at the Skowhegan School of Painting and Sculpture (1963), the University of California at Berkeley (1963-64), RISD (1967) and CUNY City College (1968). After teaching at Bennington College and the School of the Museum of Fine Arts in Boston, he returned to New York, where he has lived for over thirty years. He has exhibited widely here and abroad, at galleries including Acquavella, André Emmerich, Tricia Collins and Broadbent Gallery, London. His work belongs to such noted institutions as the Metropolitan Museum of Art, the Museum of Fine Arts, Boston, the Storm King Art Center and The Fitz William Museum in Cambridge, UK. Boepple served as chairman of the Triangle Artists' Workshop for twenty years, an artist residency program which he helped replicate in Africa and the Caribbean.