Reliquary In The Shape Of An Arm 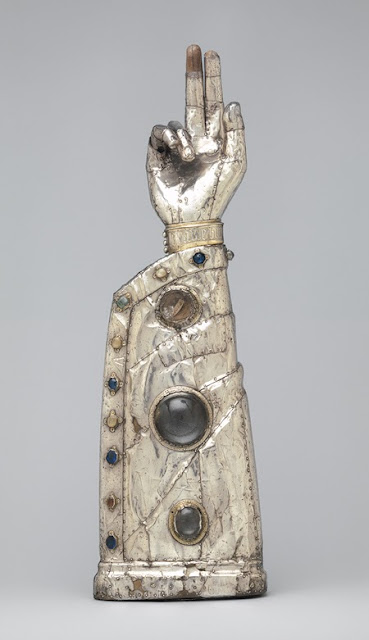 Reliquary in the Shape of an Arm
silver sheets on wood, cabochons, and glass
North French
made about 1200 - 1250

As reliquaries house fragments of saints' bodies, they sometimes reflect the shape of a limb. This blessing arm contains a relic of Saint Fiacre, as indicated by the partial Latin inscription. Famous for healing the sick, Fiacre, of Irish origin, died near Meaux, France, in the seventh century, and the city was the focus of his cult until the french Revolution. This lifesize reliquary made the idea of the saint's presence particularly vivid.

*on view @ The Metropolitan Museum of Art

Email ThisBlogThis!Share to TwitterShare to FacebookShare to Pinterest
Labels: Metropolitan Museum of Art, Reliquary in the shape of an arm, Saint Fiacre